UPTON, NY - The U.S. Department of Energy's Brookhaven National Laboratory will host a ribbon-cutting ceremony on November 16, 2004, for the latest addition to its Center for Translational Neuroimaging: a high-resolution micro magnetic resonance imaging (microMRI) laboratory. The new $1.76-million facility will be devoted to non-invasive, small-animal brain-imaging research, mainly using mice and rats, to uncover the mechanisms underlying drug addiction, Alzheimer's, autism, and other diseases of the brain. It was funded by the New York State Office of Science, Technology, and Academic Research (NYSTAR); the Office of National Drug Control Policy; Stony Brook University; and Brookhaven Lab. 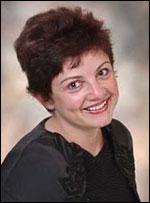 "This non-invasive imaging tool allows us to monitor brain anatomy, function, and neurochemistry over time in the same animal, and correlate those findings with effects on behavior in a very controlled way," says Helene Benveniste, who holds a joint appointment as Brookhaven's Associate Laboratory Director for Life Sciences and Medical Department Chair, and as a professor in Stony Brook University's Department of Anesthesiology.

"Now we'll be able to translate associations we've observed in human studies - where there are often many confounding variables, such as multi-drug abuse in the case of addiction studies - into cause-and-effect research questions that can be directly tested in animals. The findings from these small animal studies, in turn, will help us to fully characterize and understand the relationship between behavior, pathophysiology, and structure, and to design and test new, more effective treatments," she said.

The 9.4-tesla microMRI facility complements Brookhaven's already impressive array of imaging tools, which include two clinical positron emission tomography (PET) scanners, a microPET for studies on small animals, and a 4-tesla whole body MRI machine. PET and MRI provide unique but coincident views of brain activity that, when used together, are extremely valuable in understanding brain function. The microMRI lab at Brookhaven will be one of only four horizontal, high-field microMRI facilities on the U.S. East Coast, and will make Brookhaven's Center for Translational Neuroimaging the only facility with such widespread multimodality imaging capabilities in the Northeast. 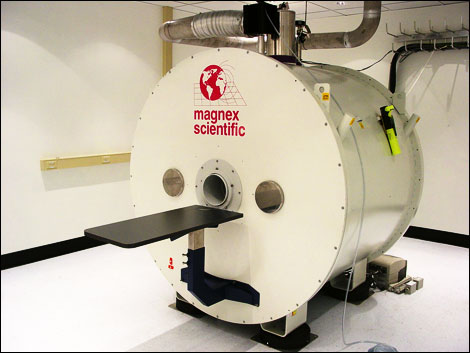 The Center for Translational Neuroimaging at Brookhaven Lab receives its core funding from the Office of Biological and Environmental Research (OBER) within the Department of Energy_s Office of Science.

"PET and MRI are a direct outgrowth of the Department of Energy_s long-standing investment in basic physics research," said Dr. James F. Decker, Principal Deputy Director of DOE_s Office of Science. "Through work on accelerators designed to answer questions about the fundamental nature of matter and energy, pioneering DOE scientists understood and realized the potential to develop these miraculous new tools for the diagnosis and treatment of disease. The ongoing research using these tools to investigate drug addiction, Alzheimer_s, and other diseases of the brain is a prime example of how our national laboratories bring together the expertise of chemists, physicists, and medical professionals to address questions of profound significance for society."

Using the various imaging modalities at the Brookhaven Center for Translational Neuroimaging, scientists have uncovered many aspects of a wide range of brain diseases and even normal aging. The new facility will enable the researchers to test hypotheses derived from these studies and foster new collaborative research projects with other leading scientists in the field, including those at Stony Brook University, Cold Spring Harbor Laboratory, and the National Institutes of Health.

Some of the projects include:

The ribbon-cutting ceremony will be held at 4 p.m. in the Clinical Research Center lobby of Brookhaven's Medical Department, Building 490. Reporters interested in attending should contact Karen McNulty Walsh or Mona S. Rowe (see above).