The following news release on the Large Synoptic Survey Telescope was issued by LSST Corporation.

TUCSON, Arizona - The Large Synoptic Survey Telescope (LSST) has received the first year of a four-year, $14.2 million award from the National Science Foundation to design and develop a world-class, 8.4-meter telescope scheduled for completion in 2012.

This award will allow engineers and scientists to complete design work already underway so that the LSST can begin construction in 2009. This unique system for surveying the heavens is made possible by advances in several technologies including: 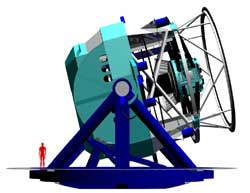 Sideview of the 8.4-meter LSST with a 6-foot tall person to show scale. The LSST has been awarded $14.2 million from the NSF to complete design studies.

The LSST will image an area of the sky roughly fifty times that of the full moon every 15 seconds, opening a movie-like window on objects that change or move on rapid time scales - supernovae explosions which can be seen halfway across the universe, nearby asteroids which might potentially strike Earth, and faint objects in the outer solar system, far beyond Pluto. Using the light-bending gravity of dark matter, the LSST will chart the history of the expansion of the universe and probe the mysterious nature of dark energy.

The LSST data will be "open" to the public and scientists around the world - anyone with a web browser will be able to access the images and other data produced by the LSST. "The LSST is a public-private partnership and will offer a 'New Sky' available to everyone," said LSST Director J. Anthony Tyson of the University of California, Davis. "Curious minds of all ages will be able to ask new questions of the LSST's public database and zoom into a color movie of the deep universe."

The LSST Corporation awarded a $2.3 million contract to the University of Arizona Steward Observatory Mirror Lab in January, 2005, to purchase the glass and begin engineering work for the LSST's 8.4-meter diameter main mirror. Although the final site for the LSST has not been decided, the telescope will be placed in one of three candidate locations — Las Campanas, Chile; Cerro Pachon, Chile; or San Pedro Martir, Baja California, Mexico.

The LSST has been identified as a national scientific priority in reports by several National Academy of Sciences and federal agency advisory committees. This judgment is based upon the LSST's ability to address some of the most pressing open questions in astronomy and fundamental physics, while driving advances in data-intensive science and computing. The National Academy of Sciences "Quarks-to-Cosmos" report recommended the LSST as an incisive probe of the nature of dark energy. The LSST will open a new frontier in addressing time variable phenomena in astronomy, according to a May 2000 academy report "Astronomy and Astrophysics in the New Millennium."