UPTON, NY - Researchers at the U.S. Department of Energy's Brookhaven National Laboratory have identified how billionth-of-a-meter sized metal particles - gold-atom clusters within carbon-atom shells - can mesh together to form larger particles and have also found a way to control this process. The results, published in the September 27, 2005, online edition of Nano Letters, may help scientists determine how these "nanoparticles," which have unique physical, chemical, and electronic properties, could be incorporated into new technologies. 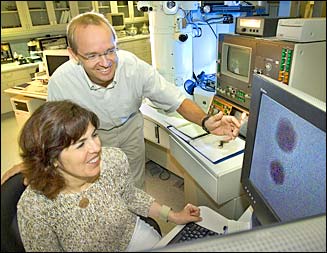 "Nanostructures that consist of a metal nanoparticle trapped within a carbon cage have great technological promise, such as in electronics and biomedical imaging systems, but scientists have more to learn about them," said Eli Sutter, a scientist at Brookhaven's Center for Functional Nanomaterials and the study's lead author. "For example, knowing how to control the size of the particles is very important because size is strongly linked to properties like electronic structure and melting temperature."

The researchers studied small groups of gold nanoparticles supported by a layer of carbon atoms. They watched the particles interact using a transmission electron microscope, which creates an image of a sample by bombarding it with a beam of electrons. They imaged the particles at "low" temperatures, from room temperature to 400 degrees Celsius (ºC), and again at high temperatures from 400ºC to 800ºC.

At low temperatures, the group found that gold particles can mesh together by forming a bridge between them that is only one atom wide. Once this bridge is built, gold atoms can shuttle back and forth between the particles, much as automobile traffic flows over a bridge. This exchange of gold atoms eventually leads to the merging of the nanoparticles connected by the bridge, and the formation of a larger particle.

At high temperatures, however, the interaction between the nanoparticles changed significantly, and involved the carbon atoms underneath. The carbon atoms near each particle, immobile at low temperatures, began to cluster together, forming a jumble of fragments and layers. When the researchers increased the intensity of the microscope's electron beam, the carbon fragments began to creep up and around the particles, eventually forming shells that completely enclosed them, much like nut shells enclosing small kernels.

Two TEM images of gold nanoparticles supported by a surface of carbon atoms. The left image shows two nanoparticles at a low temperature, which are beginning to merge into one larger particle. In the right image, taken at a high temperature, three nanoparticles are becoming enclosed by a shell of carbon. (Click image to download hi-res version.)

"Almost immediately we noticed that the carbon shells seem to prevent the gold nanoparticles from coalescing, even over long periods of time," said Sutter. "We wondered if there were conditions that would allow them to merge."

They discovered that repeatedly switching the electron-beam intensity from high to low caused a carbon shell to form around the entire particle assembly. And then something surprising happened: Instead of further preventing the particles from interacting, the large carbon shell seemed to physically squeeze them together, much like a nutcracker cracking a nutshell.

"The large shell exerted pressure on the particles within it, broke their individual shells, and triggered a merging process that is similar to what occurred at low temperatures," said Sutter. "This was not at all what we expected to happen."

Sutter and her collaborators concluded that encapsulating individual metal nanoparticles within shells made of carbon or similar materials, which they showed is possible under the right conditions, might be a good way to prevent uncontrolled size changes in nanoparticle arrays.

The Brookhaven research was funded by the Office of Basic Energy Sciences within the Department of Energy's Office of Science, which also sponsored and managed construction of the Center for Functional Nanomaterials (CFN), one of the suite of five DOE Nanoscale Sciences Research Centers. More information about the CFN can be found at http://www.cfn.bnl.gov.