UPTON, NY - Chemists at the U.S. Department of Energy's (DOE) Brookhaven National Laboratory, working with colleagues at Stony Brook University, have developed a unique experimental technique to measure the flow of energy inside a molecule in the process of breaking apart. The chemists' experiments provide a critical test of theories used in computer models of combustion, which are used, for instance, by combustion engineers to design more fuel-efficient and less polluting machines. 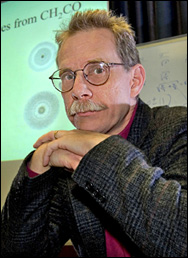 "With a trustworthy computer model of combustion, engineers can design improved engines or fuel blends without needing to build and test so many different versions," said Brookhaven chemist Gregory Hall, the principal researcher for this experiment. "The database of chemical reactions needed for such a computer program is too big to be filled in strictly with measured numbers, and we have to rely on chemical rate theory to calculate much of this database. Our experiments are important for showing how far we should trust these calculations."

The Chemical Physics Research Program in DOE's Office of Basic Energy Sciences funded the research, which is due to be published online today in the Journal of Chemical Physics.

The chemists used an experimental technique called "sliced ion imaging" to analyze the energy flow during the fragmentation of ketene, a small molecule that acts as a stand-in for more complicated fuels in these benchmark experiments. When excited with a laser, ketene breaks apart into carbon monoxide and methylene fragments, pushing away from each other with a speed that depends on the rotational and vibrational energies of the two fragment molecules. Some of the carbon monoxide fragments are then ionized (an electron is removed) by a second laser, and the ions are accelerated toward a detector screen, where each ion shows up as a flash of light, observed with a video camera. Depending on how fast and in what direction the carbon monoxide fragments were traveling when they were born, the ions will hit a different spot on the ion-imaging detector. By analyzing the images obtained by accumulating the signals from about half a million molecules, the Brookhaven scientists can determine how energy is shared between the two fragments. They have found agreement with the predictions of a chemical rate theory called variational transition state theory, refuting some earlier work that had raised questions about this theory.

"The 'slicing' is a key new feature of this method," Hall said. "By using a fast shutter on the ion detector, we can wait until the middle of the ion cloud reaches the detector before we pulse the shutter on and off again. This way, we are looking only at the molecules that originally were moving parallel to the plane of the detector. That makes the images sharper and more accurate."

NOTE TO LOCAL EDITORS: Gregory Hall is a resident of Wading River, NY.