UPTON, NY - Long Island was spared the fury of 27 hurricanes and tropical storms that developed in the Atlantic in 2005, including devastating Hurricane Katrina, but local weather was far from normal. According to records kept at the U.S. Department of Energy's Brookhaven National Laboratory, January brought record snowfall of 29 inches, beating the previous record, set in 1948, by three inches. The year brought the hottest August on record, with an average temperature of 76.2 degrees Fahrenheit (F), 1.9 degrees higher than the previous record set in 2003. In October, record rainfall of 22.14 inches soaked the ground, causing local flooding.

"October 2005 was by far the wettest month in the last 57 years that the Lab has been keeping weather statistics, with almost double the amount of rain recorded in any October, and easily beating the previous monthly 13.01 inches of record rain in January 1979," said Victor Cassella, a Brookhaven Lab meteorologist. "We received 17.23 inches of rain in five consecutive days, from October 10 to 15, with 9 inches on October 14. Only in 1954, when Hurricane Edna dumped 9.02 inches of rain, did we get more than that amount of rain in one day." 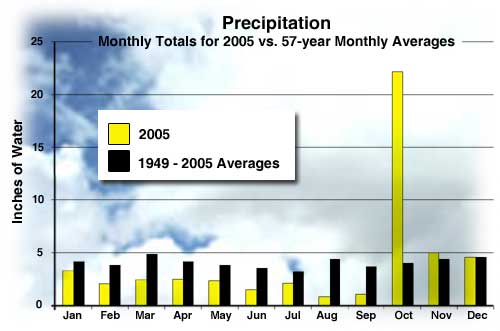 Cassella said the 2004-2005 snow season brought 78.5 inches of snow, the second snowiest season ever recorded. In the 1995-1996 season, 90.8 inches of snowfall was recorded at the Lab. But 2005 was the third consecutive year of more than 60 inches of snowfall, a pattern that has never been seen previously in the Lab's records. The average yearly snowfall in the area is 31.2 inches.

Cassella predicted last year that 2005 snowfall would be normal to slightly above normal and that we would have a pattern of extreme temperatures during the year - a partially accurate prediction. For 2006, Cassella predicts another year of above-average snowfall. Also, he warns that people should be prepared for hurricanes on Long Island. "We've recently had some very active hurricane seasons," he said. "Even though we've been spared from hurricanes over the last several years, we have to be prepared for the one that does make its way to Long Island."