Upton, NY - In electronics-based technologies, metal-oxide compounds known as "relaxor ferroelectrics" often make up key circuit components due to their unique electrical behavior. They are good insulators and can sustain large electric fields, making them excellent at storing electric charge. They can also turn a mechanical force, like squeezing, into electrical energy.

Recently, scientists at the U.S. Department of Energy's Brookhaven National Laboratory investigated the poorly understood origin of these abilities - with surprising results. Their work, which may lead to new ways to use relaxor ferroelectric materials in electronic devices, is published in the January 15, 2006, online edition of Nature Materials.

The group studied a characteristic feature of relaxor ferroelectrics - billionth-of-a-meter-sized sub-regions that each carry a tiny electric field. These "polar nanoregions" (PNRs), embedded within the material's crystal lattice, are thought to produce the materials' intriguing electrical traits, but little is known about them. The Brookhaven researchers studied PNRs by subjecting a relaxor ferroelectric sample to a strong external electric field. 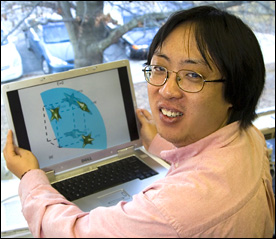 "We noticed that the weak PNR fields rotated spatially but resisted lining up with the powerful outside field," said the study's lead researcher, Brookhaven Lab physicist Guangyong Xu. "This is very surprising and extremely interesting, as we know of no other material in which this has been observed. This finding could lead to new uses for these materials, such as extremely sensitive transducer devices that convert mechanical or light energy into electrical energy."

The group used the Lab's National Synchrotron Light Source - a facility that produces x-ray, ultraviolet, and infrared light for research - to subject their sample to high-energy x-rays. They then analyzed the scattering patterns made as the x-rays passed through the sample, both before and after applying the electric field.

In the "before" case, the x-rays scattered about in many different directions, indicating that the PNR fields were oriented in many different ways. After applying the external field, the researchers expected a significant change in the x-ray patterns, showing that the PNR fields - somewhat like magnetic metal filings in a magnetic field - had neatly aligned with it. But the patterns changed in a different way than predicted. They indicated, instead, that the PNR fields preferred to line up perpendicular to the external field, even as the surrounding atomic lattice lined up along it.

"The reasons behind this behavior are not yet clear, but we plan to conduct further research that may help shed light on this interesting and rare situation," said Xu. "For example, it is possible that an even stronger external field could suppress the PNRs, or that a different relaxor ferroelectric material could display different behavior."

This work was funded by the Office of Basic Energy Sciences within the U.S. Department of Energy's Office of Science, the U.S. Office of Naval Research, and the Natural Science and Research Council of Canada.