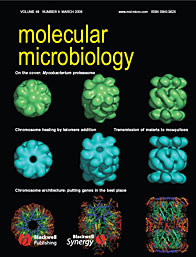 With the hope of designing more effective treatments for tuberculosis (TB), scientists from the U.S. Department of Energy's Brookhaven National Laboratory and collaborating institutions have published the first detailed reports on the biochemistry and structure of a protein-cleaving complex that is essential to the TB bacterium's survival. The research is published in two papers in the March 2006 issue of Molecular Microbiology, which features a rendition of the "proteasome" structure on its cover.

"Understanding the structure and biochemistry of this proteasome, and how it is different from those found in human cells, could greatly improve prospects for developing specific proteasome-based anti-tuberculosis treatments," said biophysicist Huilin Li, who led Brookhaven's role in the research.

Mycobacterium tuberculosis, the bacterium that causes TB, infects one person in three worldwide. In most infected people, who remain symptom-free, the bacterium is kept in check within immune system cells known as macrophages by compounds such as nitric oxide that kill or disable most bacteria. The current hypothesis is that the compounds work by damaging or destroying proteins, and the accumulated damaged proteins kill the cells if not removed.

The current studies reveal that TB bacteria have a sophisticated way to remove the damaged proteins - a protein-cleaving complex known as a proteasome - with wide specificity for degrading protein parts. This protein cleanup mechanism allows Mycobacterium tuberculosis to remain in macrophages, and possibly go on to cause active TB infections. With details revealed, it could also serve as a target for new anti-TB drugs. 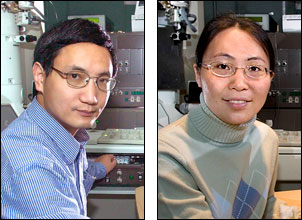 "If we could find a way to specifically inhibit the activity of this Mycobacterium tuberculosis proteasome, then we might have a new, effective treatment for TB," said Li. "Such a treatment might even eradicate TB microbes from infected individuals who show no signs of infection."

One complicating factor is that human cells also contain proteasomes for degrading unneeded proteins. This process is essential for human cell survival. So any drug targeting the TB proteasome would have to be extremely specific. This was one reason for conducting such detailed structural and biochemical studies, to try to identify the unique characteristics that would allow such a targeted drug design.

In addition, the scientists conducted studies to see how an analog for a newly approved anti-myeloma drug that targets human proteasomes binds to the TB proteasome. These studies revealed highly specific details of the proteasome active site and mechanism, which will be invaluable to designing TB specific inhibitors.

Ribbon diagram (left) showing seven-fold symmetry in the top view of the cylindrical TB proteasome, as revealed by x-ray crystallography. The core looks open, however, cryo-electron microscopy images (green structure, center) reveal a closed end, suggesting the structure is gated. Side views (right) also reveal that the structure is symmetrical top to bottom. Inside the structure there is a large chamber where the denatured proteins are cleaved. (Click image to download larger version.)

The proteasome structure was revealed by Guiqing Hu and collaborators using cryo electron microscopy in Brookhaven Lab's Biology Department and by x-ray crystallography at the Lab's National Synchrotron Light Source. It is a cylindrical gated structure, which suggests that it requires an activator that has yet to be investigated.

The biochemical studies were conducted at Weill Medical College of Cornell University by Gang Lin in a group led by Carl Nathan. Other collaborating institutions included the Max Planck Institute of Biochemistry, Cold Spring Harbor Laboratory, and Millennium Pharmaceuticals.

This research was funded by the Office of Biological and Environmental Research within the U.S. Department of Energy's Office of Science, the National Institutes of Health, and Brookhaven's Laboratory Directed Research and Development program.