DALLAS, TX - When atomic nuclei are smashed together at great speed, resulting temperatures exceed one trillion degrees, 200 million times hotter than the surface of the sun. Scientists who study nuclear matter under extreme conditions have a particular interest in the properties of particles of light called photons, which reveal valuable information because they don't interact strongly with other particles following a nuclear collision. Using the Relativistic Heavy Ion Collider (RHIC) at the U.S. Department of Energy's Brookhaven National Laboratory, physicist Stefan Bathe has measured characteristics of photons to reveal data about the temperature and density of a nuclear collision. 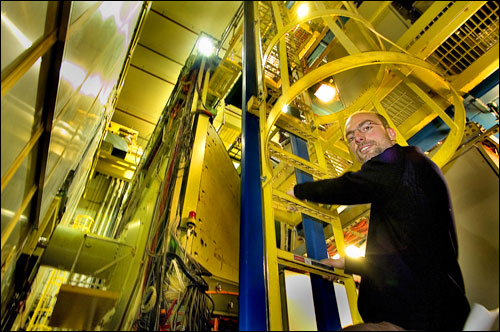 Bathe will discuss his study of direct photon production at the April meeting of the American Physical Society at the Hyatt Regency in Dallas, Texas. Bathe's talk will be held on Tuesday, April 25 at 2:06 p.m. in Landmark B. RHIC is a world-class scientific research facility used by hundreds of physicists from around the world to study what the universe may have looked like in the first few moments after its creation. RHIC drives two intersecting beams of gold ions head-on, in a subatomic collision. What physicists learn from these collisions may help us understand more about why the physical world works the way it does, from the smallest subatomic particles, to the largest stars.

Working at the PHENIX detector, Bathe has studied gold-gold, deuteron-gold, and proton-proton collisions to test the theory of quantum chromodynamics, the theory of the strong force that holds atomic nuclei together.

"While gold-gold collisions are the most interesting, we also have to understand simpler systems with fewer particles," he said. "We want to understand the strong interactions between quarks and gluons, which are the components of protons and neutrons. In a collision of nuclei, they all break apart, resulting in thousands of particles."

The vast majority of the particles released in a nuclear collision interact strongly with the nuclear medium and lose large amounts of energy. How much energy they lose reveals information about the medium. By studying the energy spectrum of direct photons, Bathe and his colleagues have been able to determine the temperature and density of the matter, which in turn reveals the phase of the collision.

"By studying photons, particles that you can see, you can learn about the temperature of the nuclear matter you've created, " he said.

Research at PHENIX is funded by the Office of Nuclear Physics within the U.S. Department of Energy's Office of Science and by a variety of other national and international organizations.