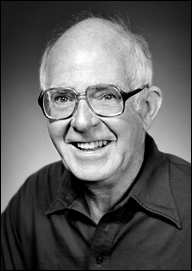 UPTON, NY — Raymond Davis Jr., Nobel Laureate and retired chemist at the U.S. Department of Energy's Brookhaven National Laboratory, passed away at his home in Blue Point, New York, on May 31, 2006, at the age of 91. He died of complications from Alzheimer's disease.

Davis won the 2002 Nobel Prize in Physics for detecting solar neutrinos, ghostlike particles produced in the nuclear reactions that power the sun. He shared the prize with Masatoshi Koshiba of Japan, and Riccardo Giacconi of the U.S.

"Neutrinos are fascinating particles, so tiny and fast that they can pass straight through everything, even the earth itself, without even slowing down," said Davis at the time of his Nobel award. "When I began my work, I was intrigued by the idea of learning something new. The interesting thing about doing new experiments is that you never know what the answer is going to be!"

Davis was the first scientist to detect solar neutrinos, the signature of nuclear fusion reactions occurring in the core of the sun. Devising a method to detect solar neutrinos based on the theory that the elusive particles produce radioactive argon when they interact with a chlorine nucleus, Davis constructed his first solar neutrino detector in 1961, 2,300 feet below ground in a limestone mine in Ohio. Building on this experience, he mounted a full-scale experiment 4,800 feet underground, in the Homestake Gold Mine in South Dakota. In research that spanned from 1967-1985, Davis consistently found only one-third of the neutrinos that standard theories predicted. His results threw the field of astrophysics into an uproar, and, for nearly three decades, physicists tried to resolve the so-called "solar neutrino puzzle."

Experiments in the 1990s using different detectors around the world eventually confirmed the solar neutrino discrepancy. Davis's lower-than-expected neutrino detection rate is now accepted by the international science community as evidence that neutrinos have the ability to change from one of the three known neutrino forms into another. This characteristic, called neutrino oscillation, implies that the neutrino has mass, a property that is not included in the current standard model of elementary particles (in contrast, particles of light, called photons, have zero mass). Davis's detector was sensitive to only one form of the neutrino, so he observed less than the expected number of solar neutrinos.

Brookhaven Lab's solar neutrino research at the Homestake Gold Mine was funded, in succession, by the chemistry office of the Atomic Energy Commission, the Energy Research and Development Administration, and then by the Department of Energy's Division of Nuclear Physics.

Davis earned a B.S. and an M.S. from the University of Maryland in 1937 and 1940, respectively, and a Ph.D. in physical chemistry from Yale University in 1942. After his 1942-1946 service in the U.S. Army Air Force and two years at Monsanto Chemical Company, he joined Brookhaven Lab's Chemistry Department in 1948. He received tenure in 1956 and was named senior chemist in 1964.

Davis retired from Brookhaven in 1984, but maintained an appointment in Brookhaven's Chemistry Department as a research collaborator. In 1985, he joined the University of Pennsylvania to continue experiments at the Homestake Gold Mine with Professor Kenneth Lande. Davis had an affiliation with the university as a research professor.

From 1971-73, Davis was on the National Aeronautics & Space Administration's Lunar Sample Review Board and was involved in the analysis of lunar dust and rocks collected by the crew of Apollo 11 on NASA's historic first flight to the moon.

Davis was born in Washington, D.C., on October 14, 1914. He is survived by his wife Anna; his sons Andrew, Roger, and Alan; his daughters Martha Kumler and Nancy Klemm; and 11 grandchildren.