UPTON, NY - Scientists at the U.S. Department of Energy's Brookhaven National Laboratory have developed a screening method to examine how newly made nanoparticles - particles with dimensions on the order of billionths of a meter - interact with human cells following exposure for various times and doses. This has led to the visualization of how human cells interact with some specific types of carbon nanoparticles. The method is described in a review article on carbon nanoparticle toxicity in a special section of the August 23, 2006, issue of the Journal of Physics: Condensed Matter devoted to developments in nanoscience and nanotechnology, now available online.

Nanoparticles may have different physical, chemical, electrical, and optical properties than occur in bulk samples of the same material, in part due to the increased surface area to volume ratio at the nanoscale. Many scientists believe that understanding these nanoscale properties and finding ways to engineer new nanomaterials will have revolutionary impacts - from more efficient energy generation and data storage to improved methods for diagnosing and treating disease. Brookhaven Lab is currently building a Center for Functional Nanomaterials (CFN) with state-of-the-art facilities for the fabrication and study of nanomaterials, with an emphasis on atomic-level tailoring of nanomaterials and nanoparticles to achieve desired properties and functions. 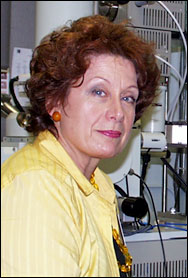 "Nanomaterials show great promise, but because of their extremely small size and unique properties, little is known about their effects on living systems," said lead author Barbara Panessa-Warren, a Brookhaven biologist who has been developing a nanoparticle cytotoxicity-screening model for the past five years. "Our experiments may provide scientists with information to help redesign nanoparticles to minimize safety concerns, and to optimize their use in health-related applications. They may also lead to effective screening practices for carbon-based materials."

A variety of studies conducted in living animals, which are described in the review article, have found a range of toxic effects resulting from exposure to carbon-based nanoparticles. All of these in vivo studies clearly show that multiple factors interact following nanoparticle exposure to produce acute and chronic changes within individual cells and the organism itself. In vitro laboratory studies, such as the cell-culture method developed by the Brookhaven team, are an attempt to simplify the research by eliminating many of the variables found in animal studies, giving researchers greater control over experimental conditions.

"By combining techniques of molecular biology with sophisticated imaging methods, we can rapidly gather information about the response of specific cell types to specific nanoparticles, making in vitro testing an inexpensive and immediate tool for screening and fine-tuning nanoparticle design to maximize safety and target specificity," Panessa-Warren said.

In the Brookhaven team's studies, the scientists used lung and colon epithelial cells - chosen to represent two likely routes of nanoparticle exposure (inhalation and ingestion) - grown as cell monolayers, where the individual cells join together to form a tight layer with many of the characteristics of lung and colon cells growing in the body as an epithelial layer. These monolayers of living cells are then exposed to varying doses of carbon nanoparticles over differing amounts of time, and the cells are studied at each time period and dose.

The scientists also tested the response of the cells to different types of nanoparticles (a raw nanotube preparation containing mostly single-walled carbon nanotubes, nanoropes, graphene and trace elements; partially cleaned air-oxidized carbon nanotubes; as well as, carbon-nanotube-derived loops used to carry antibodies). They assessed cell viability (did the cells live or die?) and growth characteristics of the monolayer, and examined any alterations within the cells using various microscopy techniques. These techniques enabled them to visualize the first contact of the nanoparticles with the cells and follow this process "ultrastructurally" so they could see how the cells responded and determine whether the nanoparticles entered the cells or caused specific changes to the cell surfaces of those cells that did not die.

Using this in vitro screening, the scientists found that a type of engineered carbon nanoparticle called a 'nanoloop,' which was made at Brookhaven, did not appear to be toxic to either cell type regardless of dose and time. In contrast, both colon and lung cells exposed to carbon nanoparticles from the raw nanotube preparation showed increased cell death with increased exposure time and dose. Microscopic studies revealed losses of cell-to-cell attachments in the monolayers, and changes in cell-surface morphology on cells where carbon nanotubes and other carbon nanoparticles had attached. Damage was severe for both the low and higher doses at three hours, suggesting that exposure time may be even more predictive of damage than nanoparticle concentration.

Using electron microscopy, the scientists found that areas in which the carbon nanoparticles, and especially carbon nanotubes, touched or attached to the cell surface, the plasma membranes became damaged and were microscopically interrupted. Images of the cell surfaces with attached carbon nanoparticles showed membrane holes that exposed the underlying cell cytoplasm. Transmission electron microscopy revealed that small carbon particles could pass into the cells and become incorporated into the cell nuclei. Neighboring cells with no attached carbon nanoparticles appeared normal and continued to grow, suggesting that direct contact with untreated nanoparticles is required for damage to occur. These findings agree with recent biochemical studies in the literature that reported the production of reactive oxygen species (free radicals) and lipid peroxidation of cell membranes following living cell contact with other forms of carbon nanoparticles called fullerenes, also known as "buckyballs."

"Although our screening method gives us a quick way to analyze human cell responses to nanoparticles at a visual macro- and micro- scale, we are now taking this to a molecular and genetic level to see whether the cells are stressed," said Pannessa-Warren.

"Ultimately any new nanomaterials intended for large-scale production or use would also have to be tested in vivo - where the combined reactions of many cell types and tissues, as well as the blood, immune, and hormonal factors, are all taken into account to assess biocompatibility and assure safety," she added. "Still, our methods give us a way to screen-out those nanoparticles that shouldn't even make it that far, or identify ways to improve them first."