CHICAGO, IL - X-ray studies at the U.S. Department of Energy's (DOE) Brookhaven National Laboratory are pointing the way to less costly and more efficient catalysts for improving the performance of fuel cells. The studies, which will be presented by Brookhaven chemist Jose Rodriguez at the 233rd National Meeting of the American Chemical Society, show that copper can be substituted for gold in reactions that keep fuel cells functioning longer while eliminating unwanted byproducts. 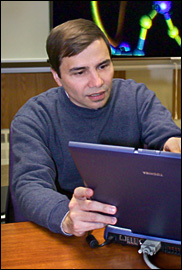 With the goal of efficient fuel cell operation in mind, researchers first need to turn their attention to hydrogen, which is one of the leading energy sources being investigated by scientists sponsored by the DOE as part of its mission to ensure the nation's future energy needs. A major problem facing today's most promising fuel-cell technologies is that the same hydrogen-rich materials feeding the reaction often contain high levels of carbon monoxide (CO), which is formed during hydrogen production. Within a fuel cell, CO "poisons" the expensive platinum catalysts that convert hydrogen into electricity, deteriorating their efficiency over time and requiring their replacement.

Rodriguez will discuss how the use of gold and copper nanoparticles might provide a solution to this problem at 8:30 a.m. Central Time (9:30 a.m. Eastern Time) on Wednesday, March 28, 2007, in room S404D, Level 4, at McCormick Place South, Chicago, Illinois. "We're trying to find a catalyst that achieves two things: produces hydrogen while removing a large amount of CO," Rodriguez said.

One way to eliminate the CO byproduct is to combine it with water to produce hydrogen gas and carbon dioxide in a process known as the "water-gas shift" reaction. With the assistance of proper catalysts, the water-shift reaction can convert nearly 100 percent of the CO into carbon dioxide. Using catalyst characterization techniques at Brookhaven's National Synchrotron Light Source (NSLS), Rodriguez and coworkers Jonathan Hanson and Jan Hrbek found that nanoparticles of either gold or copper, supported on a metal, can perform this catalytic role. In particular, they found that the greatest catalytic activity is achieved with extremely small nanoparticles - less than 4 nanometers (4 billionths of a meter) - supported on the metal cerium oxide, or ceria.

"Metal nanoparticles alone are not able to do the catalysis," Rodriguez said. "But when you put them on the ceria, you see tremendous catalytic activity."

At the nanoscale, gold has long been known to exhibit chemical reactivity that makes it a potent catalyst. The problem, however, comes with its hefty price tag. "We wanted a material that was less expensive," Rodriguez said. "We wanted to see if we could replace the gold with copper." Using x-ray diffraction, absorption, and spectroscopy studies at the NSLS, Rodriguez's group showed that the substitution is indeed possible. Although gold nanoparticles continue to show the greatest catalytic activity, copper is almost as reactive and its cost is much lower.

This research was funded by the Office of Basic Energy Sciences within the DOE's Office of Science.