As BNL aligns key scientific facilities and tools meant to make it a leader in U.S. energy research, government and Lab officials say the time has come to fight for and secure the last piece of the puzzle - the National Synchrotron Light Source II (NSLS-II). Held in conjunction with the official opening of the Center for Functional Nanomaterials (CFN), the second joint meeting of the National Synchrotron Light Source (NSLS) and CFN user communities stressed the importance of NSLS-II to the Lab's research synergy. Users' Meeting Co-Chairs Dan Fischer, National Institute of Standards & Technology (NIST) and NSLS Users' Executive Committee (UEC), and Molly Frame, Stony Brook University and CFN UEC, welcomed participants to the opening session and the next days' sessions of the May 21-23 meeting, respectively.

"Those three facilities - the NSLS, CFN, and NSLS-II - are, in our view, vital to securing the nation's energy security," said Lab Director Sam Aronson during the plenary session on May 21. "The basic challenges in the broad areas of renewable energy, energy efficiency, and storage, among others, are really enormous, and this community here today, by working together at the facilities that Brookhaven is providing and will provide in the future, are a crucial part of the solution to those energy challenges."

The need for NSLS-II, expected to receive "Critical Decision One" (CD-1) in June, was a common message among the meeting's speakers, which included Pat Dehmer, DOE's Associate Director of Basic Energy Sciences. 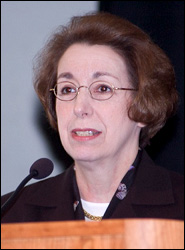 After commenting on the budget troubles that arose in early fiscal year 2007, Dehmer gave a positive outlook for next year's budget. In the president's budget request for FY 2008, the BES budget is slated to increase to $1.5 billion. Dehmer stressed the importance of support from both BNL employees and users for this budget.

Dehmer then delivered a message of the importance of "sacrifice, commitment and irrational perseverance" as the NSLS-II project proceeds. Almost eight years to the day since the CFN and the four other DOE nanocenters were envisioned, Dehmer detailed how many challenges were overcome by following these three actions.

"As you go into a project like this, you look forward to the joy of cutting the ribbon," said Dehmer, who later that day helped dedicate the CFN. "But the years of construction can actually be very difficult." Warning the crowd that the planning and construction period for NSLS-II will be difficult at one point or another for almost everyone involved, Dehmer pointed out that the reward - the brightest light source ever built - will be worth it.

Next to speak was Associate Lab Director for Light Sources Steve Dierker, who said although there is still much work to do, NSLS-II is faring well in the development process. 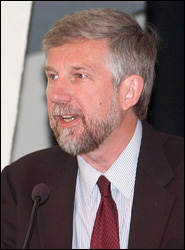 "This has been a fast-paced and exciting year," said Dierker, adding that the project has held five reviews, one workshop, and four advisory committee meetings, as well as hosting more than 75 visitors.

The culmination of this activity was a Conceptual Design Report (CDR), a document that details everything from the scientific mission of the machine to technical design parameters.

"This was truly a team and community effort, and I think this is an extraordinary document that is filled with great promise for the performance that we wish to deliver, as well as sobering in terms of the technical challenges to overcome in order to deliver that performance," Dierker said. "We believe we have an approach that will be successful in meeting those challenges."

NSLS-II underwent a CD-1 DOE review in December 2006, Dierker said, which praised the design and the team of people involved. As a result of that review, the CDR has changed slightly, and Dierker spent much of his talk presenting details from the current plan. The $850 million project currently has about 100 staff members - expected to increase to 160 by the beginning of 2008 - and groundbreaking is scheduled for fiscal year 2009, with project completion in 2015.

The facility is expected to have at least 57 beamlines, Dierker said, on the same order as the 65 operational beamlines at the current NSLS. In order to accommodate a significant fraction of users during the early operation of the facility, a plan is being finalized to relocate as many as 20 beamlines from the NSLS. These transferred beamlines are expected to serve about 1,300 users per year. To help finalize details such as NSLS-II design, beamlines, transition, and access modes, Dierker encouraged the audience to attend a user workshop to be held July 17-18 at BNL.

He also commented on the importance of the Joint Photon Sciences Institute (JPSI). This facility, which already has a financial commitment from New York State, will foster development of new scientific programs, experimental techniques, and enabling technologies. JPSI operations are slated to start in 2012 with NSLS Chair Chi-Chang Kao leading the development effort.