UPTON, NY - Students and scientists from around the globe and from throughout the U.S. have come to New York this month to participate in the fourth annual NASA Space Radiation Summer School at the U.S. Department of Energy's Brookhaven National Laboratory. The group will work in Brookhaven Lab's Medical Department and NASA Space Radiation Laboratory (NSRL) - a unique facility that simulates the harsh radiation environment of outer space - to study the possible risks astronauts may face during future long-term space flights. Thirty-nine students have participated in the program to date.

As NASA plans a mission to Mars, an outpost on the Moon, and exploration of near-Earth asteroids, many potential health risks to astronauts remain unknown. It is vitally important to learn how human space travelers will be affected by deep-space radiation and how best to protect them from harm. Space radiobiology, a relatively new field that blends the disciplines of physics and biology, addresses these questions. 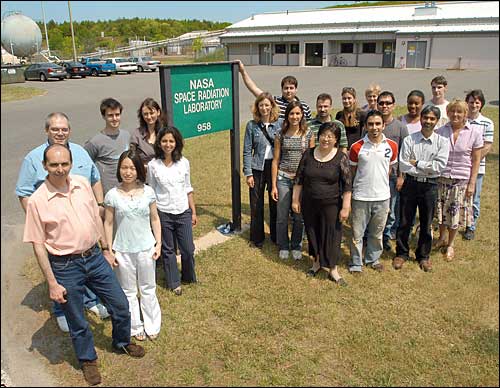 "While there is a wealth of data describing the effects of conventional radiation like x-rays, the same is not true for the types of radiation present in space. It is essential to define the potential risks of exposure to space radiation and, if necessary, develop effective countermeasures to permit safe missions of longer durations than in the past," explained Peter Guida, Medical Department Liaison Scientist for this program at Brookhaven Lab. Guida is working with Eleanor Blakely of Lawrence Berkeley National Laboratory, the 2007 NASA Summer School Director.

Said Blakely, "Our goal is to attract the highest quality students from diverse scientific backgrounds and help train them to be the next wave of space radiation researchers." The program has three scientific modules: physics (led by Cary Zeitlin of Lawrence Berkeley), biology (led by Gregory Nelson of Loma Linda University Medical Center), and experimental methods (led by Betsy Sutherland of Brookhaven Lab).

The intensive, three-week course offers a unique physical and intellectual environment not duplicated in the nation's universities, medical schools or research institutes. Students participate in both classroom activities and scientific experiments, working side-by-side with top space scientists from research organizations such as NASA, Brookhaven Lab, Lawrence Berkeley, Loma Linda University, Columbia University, University of Pennsylvania, California Institute of Technology, UT Southwestern Medical Center and University of Maryland, Baltimore. Experimental creativity and interdisciplinary approaches are emphasized. "This year's crop of students is the most internationally diverse yet, with 11 different countries represented," said Guida. "Even though the program is only in its fourth year, many of our graduates are already making contributions to the field."

Studies at NSRL simulate space radiation to learn how the intense rays may promote the development of cancer, as well as how this radiation can affect the central nervous system and other organ systems of the body. NSRL researchers are also looking at ways to protect against these dangers through shielding and other strategies to minimize the risk to space travelers.

NSRL is a $34-million facility that was built by Brookhaven Lab with funding from NASA with the cooperation of the Office of Nuclear Physics within the U.S. Department of Energy's Office of Science. Operational since 2003, the facility is part of the Lab's collider-accelerator complex, which is maintained by the DOE Office of Science's nuclear physics program and receives incremental operations and maintenance funding from NASA. It employs beams of heavy ions extracted from Brookhaven's Booster accelerator that are the best in the U.S. for studying the effects of radiation on living organisms. Scientists from more than 20 research institutions from throughout the U.S. and abroad work year-round at NSRL, supported mainly by NASA funding, to learn about the possible risks to space explorers exposed to deep-space radiation.

Journalist note: Contact us to arrange a photo of a particular individual student or group. Students will be at Brookhaven Lab until June 22.

Note to local editors: Peter Guida is a resident of Searingtown, New York.