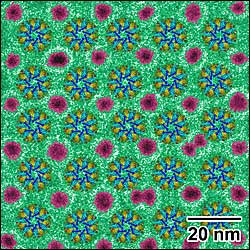 A cryo-electron micrograph showing a single layer of evenly spaced enzyme structures (colorful "wheels") interspersed with gold nanoparticles (magenta). The colorful wheel images are computer-generated models of the molecular structure of the enzyme, superimposed over the electron micrograph where the enzymes are located in the array. Constructing such regular arrays of biomolecules might help develop high efficiency electrodes for biofuels or improve the resolution of cryo-electron microscopy in structural biology. (Click image to download a high-resolution version.)

UPTON, NY - In groundbreaking research, scientists have demonstrated the ability to strategically attach gold nanoparticles - particles on the order of billionths of a meter - to proteins so as to form sheets of protein-gold arrays. The nanoparticles and methods to create nanoparticle-protein complexes can be used to help decipher protein structures, to identify functional parts of proteins, and to "glue" together new protein complexes. Applications envisioned by the researchers include catalysts for converting biomass to energy and precision "vehicles" for targeted drug delivery.

The research, which was conducted at the U.S. Department of Energy's Brookhaven National Laboratory, will be published in the July 2, 2007 issue of the journal Angewandte Chemie.

In the field of energy conversion, scientists have been searching for efficient ways to convert organic fuels such as ethanol into electricity using catalytic electrodes. But making single layers of densely packed enzymes, the functional part of such catalytic electrodes, has been a challenge. This new research shows that precisely engineered gold nanoparticles can be used to "glue" enzymes together to form oriented and ordered single layers, and that these monolayers are mechanically stable enough to be transferred onto a solid surface such as an electrode.

For this research, the scientists attached gold nanoparticles to an enzyme complex that helps drug-resistant tuberculosis bacteria survive, which has been studied by Brookhaven Lab biologist Huilin Li. The researchers suggest that gold nanoparticles might also be tailored to inactivate this enzyme complex, thereby thwarting drug-resistant TB - a research avenue they may explore in future studies.

In another part of the study, the researchers used proteins found on the surface of adenovirus, a virus that causes the common cold. Previous studies by Broookhaven's Paul Freimuth have characterized how this virus binds to the human cells it infects, and have suggested that modified forms of adenovirus could be used as vehicles to deliver drugs to specific target cells, such as those that make up tumors. 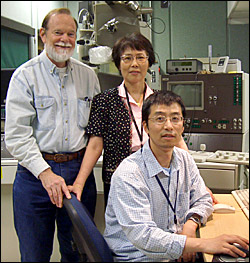 One key to this approach would be to enhance strong binding to the target cells. Toward that end, Hu and Hainfeld's group attached multiple viral proteins to the gold nanoparticles. Such constructs should have increased binding affinity for target cells and their larger size should extend blood residence time for improved drug delivery.

In another application, this new research showed that gold nanoparticles can enhance scientists' ability to decipher the structures and functionally important regions of protein molecules - the workhorses that carry out every function of living cells and whose dysfunction often leads to disease. With added nanoparticles, the "signal-to-noise ratio" and resolution of an imaging technique known as cryo-electron microscopy were significantly increased. This method might enable analysis of small biological macromolecules and complexes that are currently intractable to analyze by cryo-electron microscopy or x-ray crystallography.

This research was funded by Brookhaven's Laboratory Directed Research and Development program, the Office of Environmental and Biological Research within the U.S. Department of Energy's Office of Science, and by the Institute of General Medical Sciences within the National Institutes of Health. Collaborators on the research include: Huilin Li, Guiqing Hu, Yanbiao Zhang, and Paul Freimuth, all from the Biology Department at Brookhaven, and Joseph Wall, Martha Simon, Beth Lin, and Frank Kito of the Brookhaven Lab scanning transmission electron microscope (STEM) team.