On July 10, 2007, Lawrence Berkeley National Laboratory issued the following news release about the selection of the Homestake mine by the National Science Foundation as the site for a deep underground science laboratory. Starting in the late 1960s, Brookhaven chemist Raymond Davis Jr. housed a detector deep in Homestake, a former gold mine in South Dakota, to study solar neutrinos - ghostlike particles produced in the nuclear reactions that power the sun. His work uncovered the "solar neutrino deficit," a puzzling discovery that the number of solar neutrinos detected on Earth is only a fraction of that predicted by theory, and won him a share of the 2002 Nobel Prize in physics.

In recent years, scientists at Brookhaven, in collaboration with other institutions, developed the concept for a very large detector housed deep underground at Homestake. Such a detector, coupled with a powerful accelerator neutrino beam sent hundreds of miles through the earth - most likely from Fermi National Accelerator Laboratory, near Chicago - would lead to important new discoveries. Workshops and collaborations are in the planning process for the massive detector, which would hold 300 million gallons of water to "catch" the elusive particles. For more information, or to interview a Brookhaven scientist involved in this project, contact Karen McNulty Walsh at (631) 344-8350. 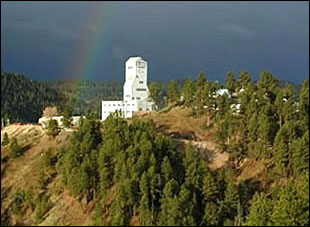 BERKELEY, CA -The National Science Foundation (NSF) has chosen Homestake, a former gold mine in the Black Hills, near Lead, South Dakota, as the site for a multipurpose deep underground science and engineering laboratory. The proposal, chosen from a field of four finalists, was prepared by a multi-institutional collaboration of researchers and submitted to an NSF site selection panel through the University of California (UC) at Berkeley. Leading the "Homestake Collaboration" was Kevin Lesko, a physicist who holds a joint appointment with UC Berkeley and the U.S. Department of Energy's Lawrence Berkeley National Laboratory (Berkeley Lab).

"This is a great event for science and engineering," said Lesko. "Clearly the NSF site selection committee members did their homework and we owe them a tremendous debt of gratitude for all their deliberations, effort and dedication. The Homestake Collaboration still has a lot of work in front of us before construction and we will benefit greatly from the combined efforts of all the other collaborations that competed for the site."

In recognition of a $70 million gift for the Homestake effort from T. Denny Sanford, owner of the First Premier Bank and Premier Bankcard Inc., and one of the country's top philanthropists, the new deep underground research facility will be named the Sanford Underground Science and Engineering Laboratory (SUSEL).

Governor Mike Rounds of South Dakota, a strong supporter of the effort to convert Homestake into a research facility, released a statement in response to the NSF announcement, which read in part:

"The NSF site selection process was rigorous and fair. On behalf of the citizens of South Dakota, Dr. Lesko and I encourage and welcome collaboration members from the other three (proposed) sites to join with us in making the Sanford Underground Science and Engineering Laboratory a world class laboratory. My hope is that the tremendous talent and wealth of ideas proposed by all of the scientists will come together for the advancement of science.

"I also thank Mr. T. Denny Sanford for his generous donation of $70 million which will enable the Sanford Underground Science and Engineering Laboratory at Homestake to provide space for early experimental programs as well as the initiation of a substantial education effort."

Berkeley Lab has been one of the principal institutes involved in the scientific proposal of the Homestake Collaboration. Speaking on behalf of Berkeley Lab in response to the announcement was James Symons, director of the Lab's Nuclear Science Division.

"At Berkeley Lab, we have been working on the Homestake proposal for over six years and are delighted that the NSF's comprehensive review process has selected Homestake as the site of a deep underground lab in the United States. The scientific opportunities offered by the Homestake site are first rate. We're excited at using the scientific, educational and technical resources of Berkeley Lab to assist in development of our new sister laboratory in South Dakota. These opportunities build on the historic connections between UC Berkeley, the Hearst family and the Homestake mine, and between Berkeley Lab and the state of South Dakota, which was the birthplace of our founder, Ernest O. Lawrence. We look forward to renewing the relationship with Homestake in the 21st century."

The Need to go Deep

A number of scientific investigations require an underground environment - the deeper the better. For example, there are questions important to the fields of astrophysics and physics that cannot be answered unless experiments are shielded from cosmic rays and other background radiation by thousands of feet of rock. Homestake is the deepest mine in the United States, reaching a depth of more than 8,000 feet. With over 375 miles of existing tunnels, it is ideally suited for conversion into a scientific research facility.

"The Homestake mine is a vast site capable of hosting a comprehensive suite of experiments in all major fields of science, including low background physics experiments and particle and nuclear physics experiments that require very large detectors," said Lesko. "The site can simultaneously host multidisciplinary deep sub-surface studies in geosciences, geoengineering and microbiology."

The Homestake proposal calls for two major deep underground facility levels. One level will serve research operating from the surface on down to 4,850 feet. Construction of the "Laboratory at 4850" will entail modification of an existing scientific site and preparation of new experimental chambers. The other facility is planned for the 7,400 foot depth level. A large network of existing caverns, drifts, ramps and boreholes will serve as the basis for the future construction of this second level over the next 30 years.

"Our plans also include a near surface facility with drive- in access for experiments that require only modest shielding," said Lesko. "In addition, potential users have requested access to depth levels at 2,000, 4,100 and 8,000 feet. Our task is to tailor the Homestake site for science access and reduce its foot-print to only the areas of greatest scientific interest."

Prominent among the experiments that require the ultra-low backgrounds realized at great depths are studies of the elusive, ghostlike sub-atomic particles known as neutrinos. In recent years, experiments at other underground neutrino laboratories have confirmed that the neutrino, once thought to be a massless particle, does indeed have a small amount of mass, and that the three families of neutrinos transform, or oscillate, between families. Like all great discoveries, this finding has raised new questions. A next generation of neutrino experiments at the much greater depths of Homestake should help provide answers.

"For example, detection of neutrinoless double beta decay, which can be done at Homestake's SUSEL, is the only way to determine whether neutrinos are their own anti-particle," said Lesko, a veteran neutrino researcher with Berkeley Lab's Nuclear Science Division.

To fully understand the neutrino, Lesko said beams of neutrinos originating from Fermilab, outside of Chicago, can be sent through nearly a thousand miles of rock to large detectors in Homestake. These detectors will search for evidence of a rare physical process, known as "leptonic CP violation," that may help explain why the universe is dominated by matter rather than anti-matter.

"These same detectors could also be used to search for nucleon decay, a long sought signal of Grand Unified Theories," Lesko said.

Scientists at SUSEL will also get a closer than ever look at the earth's crust and new opportunities for monitoring the movement of groundwater. In addition, they will be able to examine the unique biochemistry of organisms that thrive under heat and pressure conditions which would be deadly to surface dwellers. Carbon sequestration efforts - the idea of safely burying global warming gases like carbon dioxide underground - should also receive a significant boost.

Said Joseph Wang, a scientist with Berkeley Lab's Earth Sciences Division, and a senior Homestake proposal investigator, "A flag-ship earth science experiment at SUSEL could involve geomicrobiology searches for the limits of, extent of, and details of life in the underground. These investigations would probe fundamental questions at the crossroads of biology and geology, including whether there are new or very old forms of life underground."

History of the Homestake Proposal 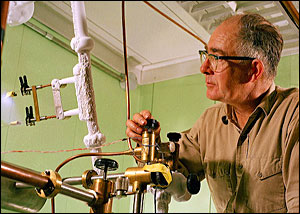 In an experiment set up in the Homestake gold mine in the 1970s, Ray Davis confirmed that the sun produces neutrinos, but also found that only about one-third of the number of neutrinos predicted by theory could be detected on earth.

Homestake was the site of the single largest gold deposit ever found in the Western Hemisphere. Mining operations, which began in 1876 and continued until 2001, yielded 40 million ounces of gold. In 1965, nuclear physicist Raymond Davis, of Brookhaven National Laboratory (BNL), set up the world's first solar neutrino detector at the 4,850 foot depth level, and conducted the research that won him a share of the 2002 Nobel Prize in physics.

Two years after mining operations ceased, Governor Rounds established a project to oversee transfer of the Homestake property from Barrick Gold Corporation, which had earlier merged with the Homestake Mining Company, with the ultimate goal of converting the mine into a deep underground science and engineering laboratory. In 2004, at the urging of the Governor, the South Dakota legislature created the South Dakota Science and Technology Authority to oversee the Homestake conversion project and subsequently allocated $35 million for the effort. In addition, a $10 million federal Housing and Urban Development grant was secured for rehabilitating the mine's infrastructure. This HUD grant is now being used for reopening the shafts and installing pumping equipment to remove water from the lower levels.

In his statement following the NSF announcement, Governor Rounds said, "We must all extend our deep appreciation to Barrick Gold Corporation and Homestake Mining Company for generously donating the mine, surface buildings and inventory. I also want to publicly thank the NSF for its thorough selection process and the Homestake Collaboration scientists for the tremendous amount of time and talent invested in making Homestake's case."

Berkeley Lab is a U.S. Department of Energy national laboratory located in Berkeley, California. It conducts unclassified scientific research and is managed by the University of California. Visit our Website at www.lbl.gov.