UPTON, NY - Scientists at the U.S. Department of Energy's Brookhaven National Laboratory and collaborating institutions around the world have detected a hidden "string order" that extends over a length of 30 nanometers (billionths of a meter) in a material that is otherwise apparently disordered. The findings, which will be published online on Thursday, July 26, 2007 by Science, could have implications for the design of materials at the nanoscale, including those used for a developing concept known as quantum computing.

In quantum computing, data are recorded using quantum properties, such as electron spins, instead of ordinary magnetism. It is widely believed that if large-scale quantum computers can be built, they will be able to solve certain problems exponentially faster than classical computers. 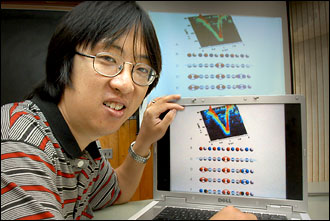 "Our goal is to understand the factors that affect the distance over which the hidden 'string order,' or quantum phase coherence, can be maintained," says Brookhaven Lab physicist Guangyong Xu, lead author on the paper. That distance - and how sensitive it is to changes in temperature or chemical impurities in the material - can be essential in determining whether a material will have useful applications.

"If you are manufacturing something, you don't want a certain property to be maintained only at one spot," Xu explains. "You want the property maintained throughout the material."

In quantum computing, the material also needs to be scalable physically to increase the amount of information it can store, and coherence must be maintained over a relatively long time, "otherwise your computing information would be lost over time," Xu says. The findings in this paper have clear implications related to these problems.

To look for the quantum phase coherence and get a handle on the factors that affect it, Xu and his collaborators studied a one-dimensional quantum spin liquid consisting of chains of nickel-oxygen-nickel atoms. A quantum spin liquid is a system in which the electron spins (analogous to tiny bar magnets) point in random directions with no particular order, even at very low temperatures.

To find out if there was phase coherence throughout this otherwise disordered system, the scientists used inelastic neutron scattering to see if magnetic excitations — "flips" or fluctuations of the spins — could propagate far enough along the spin chains. "Neutron scattering is a very powerful and probably the most direct tool in studying orders in spin systems", says Xu. The experiments were performed at the National Institute of Standards and Technology (NIST) Center for Neutron Research and at the ISIS pulsed neutron source at the Rutherford Appleton Laboratory in the U.K.

They found that despite the apparent disorder, magnetic excitations could propagate over long ranges - up to 30 nanometers at low temperature.

"We found order in an otherwise disordered system," Xu said.

Other examples of large-scale quantum phase coherence include superconductors and superfluids where quantum physics leads to fascinating properties.

The scientists also found they could limit the coherence or make it disappear altogether by introducing impurities into the material either by adding other elements (doping) or heating. In essence, these impurities break the chain. This implies that methods might be developed to tailor make materials with coherence at particular lengths. Xu cautions that his team's work is not intended to have direct application, but suggests that what they are learning could be applied by others in a range of fields related to nanofabrication and quantum computing.

Collaborators on this research include: Collin L. Broholm, Ying Chen, and Michel Kenzelmann of Johns Hopkins University and the NIST Center for Neutron Research; Yeong-Ah Soh of Dartmouth College; Gabriel Aeppli of the London Centre for Nanotechnology and University College London; John. F. DiTusa of Louisiana State University; Christopher D. Frost from the ISIS Facility, Rutherford Appleton Laboratory, U.K.; Toshimitsu Ito and Kunihiko Oka of the National Institute of Advanced Industrial Science and Technology (AIST), Japan; and Hidenori Takagi from AIST and University of Tokyo. The work was funded by the Office of Basic Energy Sciences within the U.S. Department of Energy's Office of Science, the National Science Foundation, the Wolfson-Royal Society (UK), and by the Basic Technologies program of the UK Research Councils.