UPTON, NY - Scientists at the U.S. Department of Energy's Brookhaven National Laboratory have deciphered the atomic-level structure of a cell-membrane protein that regulates the movement of zinc ions into and out of cells. Details of the structure may help scientists better understand the crucial role zinc plays in many biological process, from nerve cell communication to insulin regulation. The research will be published online by the journal Science on Thursday, August 23, 2007. 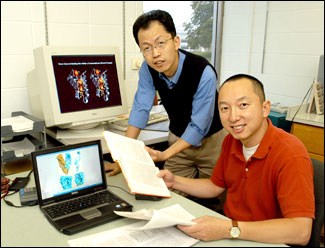 The Brookhaven scientists, Dax Fu and Min Lu, studied a zinc transporter protein taken from the common bacterium Escherichia coli. "This protein is structurally and functionally related to zinc transporter proteins found on human cells, and will therefore provide insight into the role of zinc and these transporter proteins in a variety of human conditions," said Fu. The findings may also have implications for improving microbial cells' ability to modify or remove metal contaminants from the environment.

Zinc is essential for cellular growth and differentiation, and is often a structural or catalytic component of proteins and enzymes. It is involved in myriad processes, from gene expression to immune function. It modulates the activity of chemical messengers in the brain, and helps to regulate the release of insulin from pancreatic cells in response to changing blood sugar levels.

But too much zinc can be toxic. For instance, excessive zinc may cause seizures and play a role in the deposition of amyloid protein plaques in Alzheimer's disease.

Zinc transporter proteins are one of the major regulators of zinc levels. These proteins lie partially within the cellular membrane, moving zinc ions across this otherwise impermeable barrier to maintain an optimal balance, or homeostasis.

Sometimes the transporter proteins push zinc out of cells or lock it up in vesicles within the cells. In the brain, the transporter proteins reabsorb excess zinc from extracellular spaces called synapses. Failure of this reuptake mechanism has been identified as one of the leading causes of seizures. Another human zinc transporter involved in regulating insulin release has recently been identified as a major risk factor for type-2 diabetes — and is now a hot target for drug development.

While the location of transporter proteins within the membrane makes them ideally situated for their diverse functions, it also makes them particularly difficult to study. This is because, chemically, membrane proteins are similar to grease molecules; they tend to clump together in aqueous solution. The challenge is to keep individual zinc transporter proteins isolated from one another as well as from other proteins. The purified proteins then have to be put back together in an orderly manner into a three-dimensional crystal lattice for structural analysis.

"After more than seven years of intensive efforts, we have finally learned how to crystallize the zinc transporter," said Fu.

Another critical barrier to determining the human zinc transporter protein structure is the lack of a way to produce large-scale quantities. Most mammalian membrane proteins can only be obtained from their native sources, but despite its ubiquitous functions, the zinc transporter is extremely limited in human tissues. The scientists circumvented this hurdle by using a homologous zinc transporter that can be abundantly obtained from E. coli.

At the structural level, many bacterial proteins look just like their human counterparts. In fact, Brookhaven Science Associates, manager of Brookhaven Lab, has filed a patent application for models of mammalian zinc transporters and their use, based on the Brookhaven scientists' newly derived structure.

Using E. coli proteins has the added benefit of contributing to a better understanding of how microbes maintain a proper balance of metals, and may suggest new ways to use this knowledge to improve microbes' ability to remove or sequester heavy metal contaminants in the environment. 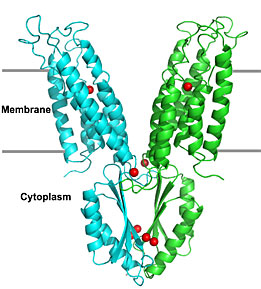 The Brookhaven scientists obtained crystals of an E. coli zinc transporter protein known as YiiP bound with zinc ions. They then deciphered the protein structure using a technique called x-ray diffraction at Brookhaven Lab's National Synchrotron Light Source. By studying how an intensely bright beam of x-rays diffracts and bounces off the crystal, the scientists can determine the positions of, and distances and angles between, the individual atoms that make up the protein. They then use computers to generate 3-D models.

Since YiiP crystals are unusually small (the size of a needle tip) and fragile, however, even the brightest x-ray beam at NSLS is only marginally adequate to produce useful diffraction data. The scientists therefore had to manually position each of thousands of YiiP crystals in the center of the x-ray beam to maximize exposure.

"This project would have been impossible without the help of the beamline scientists at the NSLS and the easy access to this remarkable scientific facility," said Fu.

The crystal structure of YiiP reveals an unusual Y-shaped architecture made of a pair of identical protein chains. They juxtapose each other in the cell's cytoplasm to form the base of the Y where the protein chains swing out and insert into the membrane.

The cytoplasmic domain adopts a structural fold similar to a family of small soluble proteins involved in intracellular metal ion trafficking. The transmembrane domain is characterized by two cavities, which collectively penetrate more than half of the membrane thickness from opposite membrane surfaces.

"The YiiP structure suggests that the cytoplasmic domains may receive zinc ions inside the cell and deliver them to a water-filled cavity where the ions are then transported across the membrane barrier via a protein conformational change," Fu said.

"In addition to providing information about the specific function of a zinc transporter protein, our structure provides a more general conceptual framework for understanding the selective binding and energized movement of metal ions across membranes," said Lu.

This research was funded by the National Institutes of Health and supported by the Biology Department at Brookhaven National Laboratory, which receives funding from the Office of Biological and Environmental Research within the U.S. Department of Energy's Office of Science.