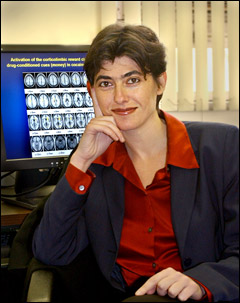 "This altered sensitivity to reward may help explain why some drug-addicted individuals are unable to modify their drug-taking behavior, even in the face of well-understood negative consequences and/or positive incentives for behavioral change," said Rita Goldstein, who runs the neuropsychoimaging lab at the U.S. Department of Energy's Brookhaven National Laboratory where the work was done. Muhammad A. Parvaz, a Stony Brook University graduate student working with Goldstein, will present the findings at the Society for Neuroscience annual meeting in San Diego on Wednesday, November 7, 2007.

The researchers studied 18 current cocaine users and 18 age-matched control subjects. They outfitted each subject with a cap of electrodes to measure brain activity after instructing the subjects to press or not press a button in response to certain visual prompts. During the task, subjects were told they could earn various amounts of money for fast and accurate performance.

The scientists were specifically interested in the P300 component of the brain waves "time locked" to the task (known as Event-Related Potentials). The P300, a positive voltage potential occurring at a latency of 300 milliseconds after presentation of a novel or meaningful stimulus, has been shown to be blunted in individuals addicted to alcohol and their offspring. The current study demonstrates, for the first time, a blunted P300 response to a commonly occurring and generalized abstract reward - money - in cocaine-addicted individuals with recent cocaine use.

The findings: In healthy control subjects, the P300 response was significantly higher and both accuracy and speed of performance were significantly better and faster, respectively, when a monetary reward was offered compared with when the reward was absent (45 vs. 0 cents). These responses to money in both brain and behavioral measures - and their interdependence - were reduced in cocaine-addicted individuals. In addition, those who had used cocaine most frequently during the year preceding the study were the least able to improve their behavioral performance in response to monetary rewards. 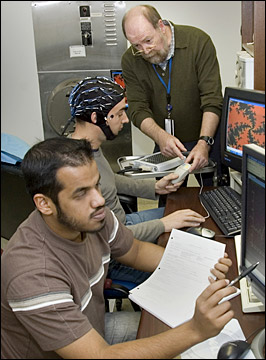 Interestingly, these results could not be attributed to decreased task engagement in the cocaine users, who instead reported being more interested in the task than the control subjects. It is possible that this heightened interest could be attributed to recent cocaine use, which was documented in all cocaine-using subjects in this study by positive urine screening tests.

"So despite greater self-reported interest, cocaine users did not respond faster or more accurately and their brain activity did not change in response to monetary reward to the same degree as in the healthy control subjects," Parvaz said.

"Individuals with such blunted neural and behavioral sensitivity to rewards may have a particularly difficult time responding to abstract incentives designed to motivate behavioral changes - especially when outside of a structured treatment environment or when rewards are not readily available or clearly contingent on behavior," Goldstein said.

"It would be interesting to see if there are any differences between the cocaine users studied here, who were not seeking treatment, and those in treatment or abstinent for longer periods of time," Parvaz suggested. Such a comparison would allow the researchers to determine whether recovery of sensitivity to reward can be expected, and assess the time frame for such recovery. The researchers may also extend the study to see if their findings can be generalized to negative reinforcement, such as the loss of money.

This research was funded by: the Office of Biological and Environmental Research (OBER) within the U.S. Department of Energy's Office of Science; the National Institute on Drug Abuse; Laboratory Directed Research and Development funding from OBER; a Young Investigator Award from NARSAD (a mental health research association); a Stony Brook University/Brookhaven National Laboratory seed grant; the National Institute on Alcohol Abuse and Alcoholism; and by Stony Brook University's General Clinical Research Center.