Findings have implications for understanding plant defenses and for engineering biofuels

UPTON, NY - By studying how plants change their production of amino acids in response to a simulated "attack," scientists at the U.S. Department of Energy's Brookhaven National Laboratory have uncovered clues that may help engineer more pest-resistant crops and feedstocks that are easily convertible to ethanol, a burnable biofuel. They will present their latest findings at a U.S. Department of Agriculture workshop in San Diego, December 8-9, 2007. 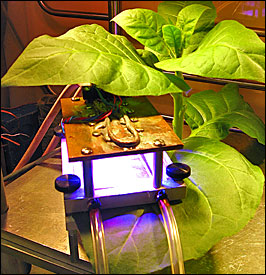 Ammonia gas labeled with radioactive nitrogen-13 is pulsed into a tobacco plant leaf using this apparatus. The setup allows scientists to monitor nitrogen uptake into plant amino acids and monitor their distribution within the plant. (Click image to download hi-res version)

The scientists were studying the effects of jasmonate - a plant hormone long associated with defense and stress signaling that is produced, for example, when insects start chewing on a leaf. The Brookhaven team was particularly interested in understanding the role jasmonate plays in altering the composition of cell walls - structures comprised primarily of polysaccharides such as cellulose and hemicelluloses and other complex macromolecules such as lignin. Previous research has shown that jasmonate alters the balance of these substances in structural tissue, favoring lignin at the expense of cellulose.

"This response makes sense in plant defense because it renders the plant tissue harder to digest and less nutrient-rich - and therefore less attractive to plant eaters," said Richard Ferrieri, who leads the Brookhaven team. "Understanding this balance and the factors that affect it may assist scientists trying to design pest-resistant crops. It could also lead to ways to push the balance in reverse, in favor of cellulose, to reduce the energy costs of converting plant feedstocks into ethanol fuel. Cellulose fibers break down more easily in the biofuel-production process."

To assess changes in plant metabolism and the distribution of resources within plants, the Brookhaven team uses many of the same short-lived radioisotopes used by the positron emission tomography (PET) medical imaging group at Brookhaven Lab. Using a radioactive form of nitrogen (13N) as ammonia gas, they most recently developed a way to rapidly infuse radiotracer into intact plant leaves and follow the uptake of labeled nitrogen into amino acids, the building blocks of proteins. 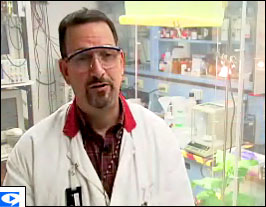 "Ammonia is normally toxic to plants, but because of the extremely small amount used, the plant does not experience a physiological response," Ferrieri said. "Furthermore, because nitrogen-13 is the only radioactive isotope of nitrogen and it decays so rapidly, we can use it to take 'snapshots' of the plants' amino acid machinery over time, testing and retesting the same plant using very small amounts of tissue."

The technique revealed increased movement of amino acids away from mature leaves into younger, developing leaves and roots shortly after jasmonate treatment. Most significantly, the team detected increased production of the amino acids glycine and serine in response to jasmonate. These amino acids are believed to play a role as precursors in methylation steps in lignin production, and may very well be key metabolic control points linking jasmonate defense signaling with its ability to increase cell-wall lignin.

"Understanding the time-sequence for these metabolic changes could lead to a strategy for controlling cell-wall composition," Ferrieri said. "We know that several key enzymes in the lignin pathway are 'turned-on' by jasmonate, but we don't know the time sequence for these events. Studies using short-lived radiotracers can help illuminate these events, and perhaps help us or others devise ways to control them for our benefit."

In addition to Ferrieri, the research team includes Michael Schueller of Brookhaven and exchange student Nils Hanik of Johannes Gutenberg University, Mainz, Germany. The research was funded by the Office of Biological and Environmental Research within the U.S. Department of Energy's Office of Science, the U.S. Department of Agriculture, and Deutscher Akademischer Austauschdienst.