The following news release was issued today by Stony Brook University School of Medicine. It involves research conducted in part at the U.S. Department of Energy's Brookhaven National Laboratory with Brookhaven Laboratory collaborators. 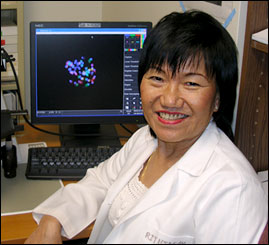 STONY BROOK, N.Y. - Stony Brook University Medical Center researcher Kanokporn (Noy) Rithidech, Ph.D., Associate Professor of Research Pathology, received a four-year $1.4 million grant from the National Aeronautics and Space Administration (NASA) to conduct research that is designed to gain a better understanding about the possible cancer risks encountered by astronauts when they are exposed to space radiation. Dr. Rithidech uses a novel method to map genetic changes in laboratory animals after exposure to protons and analyzes the dose-rate effect of protons and their link to cancer. The study runs through fall 2011.

NASA and radiation experts report that protons are the most abundant components of solar particle events in space and perhaps the most dangerous form of radiation astronauts are exposed to during space travel.

"This research may prove to uncover how much or how little exposure to proton radiation leads to the development of cancer - mainly leukemia - in mice," says Dr. Rithidech, noting that only animal models are possible for space-radiation exposure studies.

The exposures take place at the NASA Space Radiation Laboratory at the U.S. Department of Energy's (DOE) Brookhaven National Laboratory (BNL). This facility, built and operated by NASA in cooperation with the DOE's Office of Nuclear Physics, uses particle beams from BNL accelerators to simulate various types of radiation found in space.

Dr. Rithidech uses a technology called whole genome multi-color fluorescence in situ hybridization (mFISH) to determine the frequencies of chromosomal damage in bone marrow cells of mice exposed to protons. The doses and dose rates used are comparable to those that astronauts encounter in space. As a chromosomal marking technology, mFISH is a high resolution method that uniquely paints and simultaneously detects damages in each individual pair of chromosomes of the whole genome in individual cells.

"This method is robust and sensitive, and it enables us to examine the entire mouse genome and conduct studies to map out genomic instability caused by the radiation exposure," says Dr. Rithidech. "We anticipate that our results will lead to information that is vital to NASA effectively addressing critical questions about cancer risk associated with space exploration." 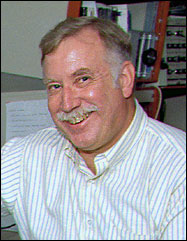 Co-investigator Carl Anderson, Ph.D., Chair of the Department of Biology at BNL and an internationally recognized geneticist, believes the study results may reach beyond understanding cancer risks associated with space travel and may lend insights to treating cancer as well.

Kenneth Shroyer, M.D., Chair of the Department of Pathology at SBUMC, a nationally recognized expert in translational studies in the development of novel molecular markers for treating cancer, feels that the implications may be vastly relevant to cancers other than leukemia.

"The mFISH technology may also help facilitate the discovery of genetic changes in other cancers that are unrelated to inonizing radiation," says Dr. Shroyer.

Dr. Rithidech has teamed up with investigators from major national research institutions, including BNL, the University of Texas and University of Iowa. In addition to investigating the dose-rate effects of protons, the research team hopes to identify specific chromosomes damaged, and define the damage, during cancer development.