UPTON, NY - Researchers at the U.S. Department of Energy's Brookhaven National Laboratory have unveiled important details about a class of catalysts that could help improve the performance of fuel cells. With the goal of producing "clean" hydrogen for fuel cell reactions in mind, the researchers determined why two next-generation catalysts including gold, cerium, titanium, and oxygen nanomaterials exhibit very high activity. Their results will be published online in the December 14, 2007, edition of the journal Science. 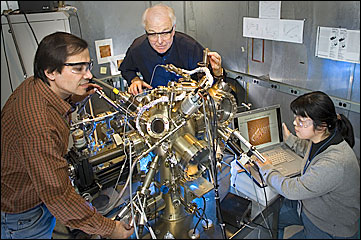 Fuel cells combine hydrogen and oxygen without combustion to produce direct electrical power and water. They are attractive as a source of power for transportation applications because of their high energy efficiency, the potential for using a variety of fuel sources, and their zero emissions. However, a major problem facing this technology is that the hydrogen-rich materials feeding the reaction often contain carbon monoxide (CO), which is formed during hydrogen production. Within a fuel cell, CO "poisons" the expensive platinum-based catalysts that convert hydrogen into electricity, deteriorating their efficiency over time and requiring their replacement.

"These nanomaterials have recently been reported as very efficient catalysts for the WGS reaction," said Brookhaven chemist Jan Hrbek. "This was a surprising finding because neither bulk gold nor bulk ceria and titania are active as catalysts." 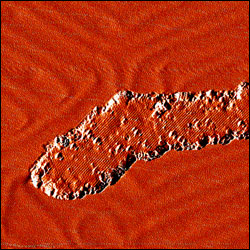 To determine how these nanocatalysts work, the research team developed so-called "inverse model catalysts." The WGS catalysts usually consist of gold nanoparticles dispersed on a ceria or titania surface - a small amount of the expensive metal placed on the cheap oxide. But to get a better look at the surface interactions, the researchers placed ceria or titania nanoparticles on a pure gold surface.

"For the first time, we established that although pure gold is inert for the WGS reaction, if you put a small amount of ceria or titanium on it, it becomes extremely active," Rodriguez said. "So although these inverse catalysts are just models, they have catalytic activity comparable to, and sometimes better than, the real deal."

Using a technique called x-ray photoelectron spectroscopy at Brookhaven's National Synchrotron Light Source, as well as scanning tunneling microscopy and calculations, the researchers discovered that the catalysts' oxides are the reason for their high activity.

"The oxides have unique properties on the nanoscale and are able to break apart water molecules, which is the most difficult part of the WGS reaction," Hrbek said. Added Brookhaven physicist Ping Liu: "After you dissociate the water, the reaction continues on to eliminate CO. But if you don't have nanosized oxide particles, none of this will work."

The researchers plan to continue their study of these catalysts at the NSLS and CFN in order to further explore the reaction mechanism and optimize its performance. Funding for this research was provided by the Office of Basic Energy Sciences, within the U.S. Department of Energy's Office of Science.

The CFN is one of the five DOE Nanoscale Science Research Centers (NSRCs), premier national user facilities for interdisciplinary research at the nanoscale. Together the NSRCs comprise a suite of complementary facilities that provide researchers with state-of-the-art capabilities to fabricate, process, characterize, and model nanoscale materials, and constitute the largest infrastructure investment of the National Nanotechnology Initiative. The NSRCs are located at DOE's Brookhaven, Argonne, Lawrence Berkeley, Oak Ridge, and Sandia and Los Alamos National Laboratories. For more information about the DOE NSRCs, please visit http://nano.energy.gov/.