UPTON, NY - In an achievement some see as the "holy grail" of nanoscience, researchers at the U.S. Department of Energy's Brookhaven National Laboratory have for the first time used DNA to guide the creation of three-dimensional, ordered, crystalline structures of nanoparticles (particles with dimensions measured in billionths of a meter). The ability to engineer such 3-D structures is essential to producing functional materials that take advantage of the unique properties that may exist at the nanoscale - for example, enhanced magnetism, improved catalytic activity, or new optical properties. The research will be published in the January 31, 2008, issue of the journal Nature. 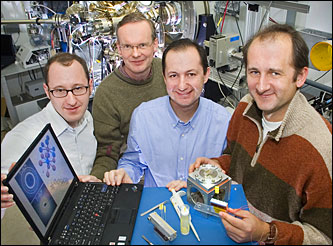 "From previous research, we know that highly selective DNA binding can be used to program nanoparticle interactions," said Oleg Gang, a scientist at Brookhaven's Center for Functional Nanomaterials (CFN), who led the interdisciplinary research team, which includes Dmytro Nykypanchuk and Mathew Maye of the CFN, and Daniel van der Lelie of the Biology Department. "But while theory has intriguingly predicted that DNA can guide nanoparticles to form ordered, 3-D phases, no one has accomplished this experimentally, until now."

As with the group's previous work, the new assembly method relies on the attractive forces between complementary strands of DNA - the molecule made of pairing bases known by the letters A, T, G, and C that carries the genetic code of living things. First, the scientists attach to nanoparticles hair-like extensions of DNA with specific "recognition sequences" of complementary bases. Then they mix the DNA-covered particles in solution. When the recognition sequences find one another in solution, they bind together to link the nanoparticles.

This first binding is necessary, but not sufficient, to produce the organized structures the scientists are seeking. To achieve ordered crystals, the scientists alter the properties of DNA and borrow some techniques known for traditional crystals. 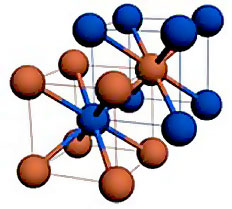 Importantly, they heat the samples of DNA-linked particles and then cool them back to room temperature. "This 'thermal processing' is somewhat similar to annealing used in forming more common crystals made from atoms," explained Nykypanchuk. "It allows the nanoparticles to unbind, reshuffle, and find more stable binding arrangements."

The team also experimented with different degrees of DNA flexibility, recognition sequences, and DNA designs in order to find a "sweet spot" of interactions where a stable, crystalline form would appear.

Results from a variety of analysis techniques, including small angle x-ray scattering at the National Synchrotron Light Source and dynamic light scattering and different types of optical spectroscopies and electron microscopy at the CFN, were combined to reveal the detail of the ordered structures and the underlying processes for their formation. These results indicate that the scientists have indeed found that sweet spot to create 3-D nanoparticle assemblies with long-range crystalline order using DNA. The crystals are remarkably open, with the nanoparticles themselves occupying only 5 percent of the crystal lattice volume, and DNA occupying another 5 percent. "This open structure leaves a lot of room for future modifications, including the incorporation of different nano-objects or biomolecules, which will lead to enhanced nanoscale properties and new classes of applications," said Maye. For example, pairing gold nanoparticles with other metals often improves catalytic activity. Additionally, the DNA linking molecules can be used as a kind of chemical scaffold for adding small molecules, polymers, or proteins.

Furthermore, once the crystal structure is set, it remains stable through repeated heating and cooling cycles, a feature important to many potential applications. 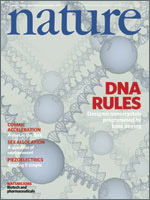 This research was featured on the cover of the January 31, 2008 issue of Nature. The research was also featured in a "News and Views" article in the same issue located here.

The crystals are also extraordinarily sensitive to thermal expansion - 100 times more sensitive than ordinary materials, probably due to the heat sensitivity of DNA. This significant thermal expansion could be a plus in controlling optical and magnetic properties, for example, which are strongly affected by changes in the distance between particles. The ability to effect large changes in these properties underlies many potential applications such as energy conversion and storage, as well as sensor technology.

The Brookhaven team worked with gold nanoparticles as a model, but they say the method can be applied to other nanoparticles as well. And they fully expect the technique could yield a wide array of crystalline phases with different types of 3-D lattices that could be tailored to particular functions.

"This work is the first step to demonstrate that it is possible to obtain ordered structures. But it opens so many avenues for researchers, and this is why it is so exciting," Gang says.

Brookhaven Lab has filed a patent application under the Patent Cooperation Treaty for this invention. For information about the patent or licensing this technology, contact Kimberley Elcess at (631) 344-4151, or elcess@bnl.gov.

This research was funded by the Division of Materials Science and Engineering in the Office of Basic Energy Sciences within the U.S. Department of Energy's Office of Science.

The Center for Functional Nanomaterials (CFN) is one of the five DOE Nanoscale Science Research Centers (NSRCs), premier national user facilities for interdisciplinary research at the nanoscale. Together the NSRCs comprise a suite of complementary facilities that provide researchers with state-of-the-art capabilities to fabricate, process, characterize, and model nanoscale materials, and constitute the largest infrastructure investment of the National Nanotechnology Initiative. The NSRCs are located at DOE's Brookhaven, Argonne, Lawrence Berkeley, Oak Ridge, and Sandia and Los Alamos National Laboratories. For more information about the DOE NSRCs, please visit http://nano.energy.gov.