UPTON, NY - Scientists at the U.S. Department of Energy's Brookhaven National Laboratory, F. Avraham Dilmanian and James F. Hainfeld, together with Gerard M. Morris, a guest researcher at Brookhaven Lab who is a senior research scientist at Morvus Technology Ltd., Wales, have won The Long Island Technology Hall of Fame award for the most innovative patent in the category of innovation for the individual. The patent for a method for implementing an experimental procedure to treat cancer, called microbeam radiation therapy (MRT), was chosen for the award from among more than 1,600 patents that were granted to Long Island residents in 2007. 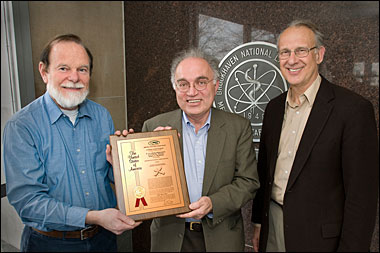 As it was first implemented, MRT used Brookhaven's National Synchrotron Light Source to produce arrays of parallel, very thin x-ray beams to irradiate and destroy malignant tumors, while keeping normal adjacent tissues free from harm. MRT research was initiated in the early 1990s at Brookhaven Lab by now retired Brookhaven scientist Daniel Slatkin and the late Per Spanne, also of Brookhaven, and Dilmanian.

In 2006, Dilmanian, with colleagues from Stony Brook University, the IRCCS NEUROMED Medical Center in Italy, and Georgetown University implemented the method of delivery for interlaced MRT, using thicker microbeams. The patent describes a way to interlace the arrays of thicker beams to produce an unsegmented radiation field at the target to increase the killing potential there, while still sparing healthy tissue.

For interlacing, the gaps between the beams in each array were the same as the thickness of each beam, so the beams from one array would fill the gaps in the other at the target to produce the equivalent of an unsegmented beam. In this way, the tumor can be given a lethal dose, while the surrounding healthy tissue is exposed to segmented radiation from which healthy tissue can recover. This method is different from conventional MRT, which exposes the tumor to arrays of very thin microbeams of non-interlacing geometry at very high doses. The results of the 2006 experiments indicated that the interlacing method used with thick beams was able to destroy a small region of the brains of rodents without damaging surrounding tissues.

"The interlacing method looks very promising for treating spinal cord tumors, brain tumors of small and medium size, and regularly shaped, small and medium size tumors of the head and neck. In particular, this method is ideal for treating areas near radiosensitive organs because surrounding tissue is kept intact, and the dose from the interlacing method sharply stops at the edge of the targeted tissue," Dilmanian said.

The beam thickness used in this recent research could be produced by either a dedicated synchrotron facility or specialized x-ray tubes of extremely high voltage and current. The use of x-ray tubes, which may be developed in the future, would make the technology readily available in hospitals.

"However, more animal studies must be done before the method can be used in patient trials," Hainfeld said. "My colleagues and I are encouraged by its success, and we hope that future studies will lead to an improved cancer therapy."

In addition to his position as medical scientist at Brookhaven, Dilmanian is Associate Professor of Research, Department of Radiation Oncology, at the Stony Brook University Medical Center. Hainfeld, a biophysicist at Brookhaven, is also founder and CEO of Nanoprobes, Inc., a Long Island company based in Yaphank.

Brookhaven Science Associates, the company that manages Brookhaven Lab for the U.S. Department of Energy, holds the patent (U.S. Patent No. 7,194,063) for the improved method for implementing MRT.

The recent MRT studies were also carried out at Brookhaven's National Synchrotron Light Source, which is funded by the U.S. Department of Energy's Office of Basic Energy Sciences.