Scientists Determine Drug Target for the Most Potent Botulinum Neurotoxin

UPTON, NY- Botulinum neurotoxin — responsible for the deadly food poisoning disease botulism and for the beneficial effects of smoothing out facial wrinkles - can also be used as a dreaded biological weapon. When ingested or inhaled, less than a billionth of an ounce can cause muscle paralysis and eventual death. Although experimental vaccines administered prior to exposure can inhibit the destructive action of this neurotoxin - the most deadly protein known to humans — no effective pharmacological treatment exists. 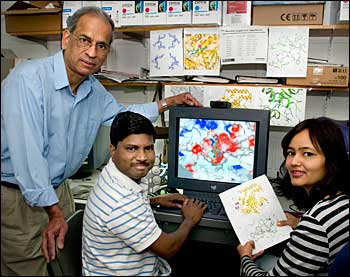 Reviewing their data are (from left) Brookhaven Lab researchers Subramanyam Swaminathan, Desigan Kumaran and Richa Rawat. (Click on the image to download a high-resolution version.)

Now, scientists at the U.S. Department of Energy's Brookhaven National Laboratory and the U.S. Army Medical Research Institute of Infectious Diseases (USAMRIID) have taken the first step toward designing an effective antidote to the most potent form of the toxin. They have found that they can trick the toxin to bypass its normal binding protein, thereby blocking its deadly action. The results of their research are reported in the April 22, 2008 online issue of the Journal of Biological Chemistry.

"We have found a highly efficient inhibitor of botulinum neurotoxin type A - the most potent of seven neurotoxins produced by the bacterium Clostridium botulinum. This finding can lead to a very effective drug to stop the devastating effects of the toxin," said Brookhaven Lab biologist Subramanyam Swaminathan, the study's co-principal investigator. "We intend to do further research to tailor the inhibitor for the best results."

"We are excited about the success of this work and the prospects it holds for future drug development," said USAMRIID principal investigator S. Ashraf Ahmed, who initiated the structure-based inhibitor design as part of the Institute's bio-defense research program.

To cause its deadly effects, the botulinum neurotoxin first binds to a nerve cell membrane, which curves inward, incorporating the toxin into a vesicle that drifts inside the cell. The toxin eventually travels from the vesicle to the cytosol, the internal fluid of the cell. The toxin then cleaves specific proteins in the cytosol, thereby blocking the release of neurotransmitters - chemicals nerve cells use to communicate with one another and with muscles. Blockage of this communication paralyzes muscles - including those that enable breathing.

To block the toxin's action, the researchers designed four "decoy" protein fragments that mimic the structure of the protein to which the toxin ordinarily binds. The toxin then attaches itself to the decoy fragments instead of to the cell's protein. This re-routing of the toxin allows neurotransmitters to keep functioning, thus stopping the toxin's pathological effects.

The scientists used x-ray techniques at Brookhaven's National Synchrotron Light Source (NSLS) to see how the toxin binds to the protein inhibitors. They found that all four decoy proteins are efficient at inhibiting the toxin's binding to the cell's protein, but one of them in particular is by far the best of any known inhibitors. The scientists' next step in this process is to transform the most effective of the four protein fragments into a drug-like molecule before clinical testing is done.

"This study represents an impressive collaboration in identifying potential inhibitors of the toxin for therapeutic use," said Colonel George W. Korch, Jr., USAMRIID's commander. "It builds upon the successes we have realized in developing effective next-generation vaccines to protect our citizens against the toxin's deadly effects prior to exposure."

The scientists did not work with intact Clostridium botulinum bacteria. Instead, they produced a functional fragment of the neurotoxin protein, which is not toxic. The research is performed in strict compliance with Brookhaven's Institutional Biosafety Committee regulations according to standards set by the U.S. Centers for Disease Control and Prevention. Only authorized scientists have access to the laboratory.

USAMRIID, located at Fort Detrick, Maryland, is the lead medical research laboratory for the U.S. Biological Defense Research Program, and plays a key role in national defense and in infectious disease research. The Institute conducts basic and applied research on biological threats resulting in medical solutions (such as vaccines, drugs and diagnostics) to protect the warfighter. While USAMRIID's primary mission is focused on the military, its research often has applications that benefit society as a whole. USAMRIID is a subordinate laboratory of the U.S. Army Medical Research and Materiel Command. For more information, visit www.usamriid.army.mil