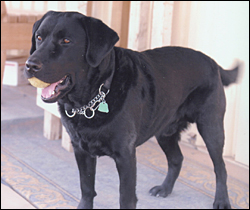 Boe and Budge, two military therapy dogs who visited the Lab in December 2007 as part of their training, have been stationed in military field hospitals in Iraq where they provide companionship and a morale boost to recovering soldiers. The dogs completed most of their training at the Guide Dog Foundation (GDF) in Smithtown. The GDF has partnered with the U.S. Army, which provides for the safe handling of these dogs as a stress relief for soldiers.

In these photos, Boe is relaxing on a cooling mat donated by the Brookhaven Veterans' Association (BVA). The mat provides relief to the dogs during hot weather in Iraq. Budge, on the other hand, is busy playing catch. Captain Cecilia Najera of Combat Stress Control, 528th Medical Detachment, Iraq, who handles the dogs, sent a holiday card and these photos to the BVA thanking them for their support of Boe and Budge. 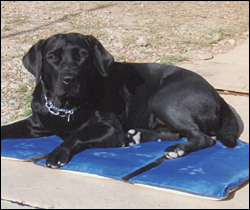 BVA Commander Don Farnam said, "With special thanks to the Laboratory Protection Division who coordinated the training exercises, the BVA is happy to partner with the GDF and the U.S. Army to support this program. Based on reports back from the soldiers, it seems that these dogs are enjoying near 'rock star' status and have had a positive effect on recuperating soldiers."