A team led by physicists at the Science and Technology Facilities Council (STFC) and Brookhaven National Laboratory (BNL) have resolved a decade-long puzzle that is set to have huge implications for use of one of the most versatile classes of materials available to us for future technology applications: copper oxide ceramics. The results are published online this week in the journal Nature Physics. 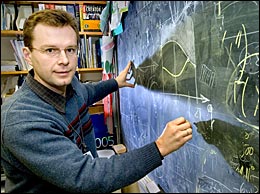 Professor Toby Perring, using the ISIS neutron source at the STFC’s Rutherford Appleton Laboratory and Dr Igor Zaliznyak from BNL have been studying the properties of copper oxide ceramics, some of the most puzzling materials ever made that serve as a grueling testing ground to our basic understanding of physics.

Comparing experimental data with predictions from exact theories and first principle calculations is one of the major parts of any scientific method, allowing scientists to make sure they have a full grasp of the basic principles at work and to study if there are gaps in our understanding. However for copper oxide ceramics, long-standing discrepancies between experiment and calculation have made it difficult to robustly identify the most promising explanations of their physical properties. Many of the copper oxide ceramics are electrically superconducting (a phenomenon occurring in certain materials that happens generally at very low temperatures characterised by exactly zero electrical resistance and the exclusion of the interior magnetic field) and also have unusual magnetic properties.

“When making comparisons between experiment and calculation, we, and others, were often finding discrepancies that were then being explained away as systematic errors, imperfections in the samples, or other effects,” said Professor Perring. “But there are only so many times you can ignore these factors before you have to work out why they are there. The answer in the end was as straightforward as making sure to include all the physics”.

Calculations previously had been based on copper atoms being isolated; the correct shape of the magnetism of copper atoms when part of a covalent bond (a form of chemical bonding that is characterised by the sharing of pairs of electrons between atoms, or between atoms and other covalent bonds) had not been taken into account.

Copper-oxygen-copper bonds are a common feature of the copper oxide ceramic family, with the atomic level magnetism arising from the arrangement of electrons on each copper atom. Their bonding causes the spin distribution of the electrons to be changed quite dramatically from what would be found on a single isolated copper atom.

Dr Zaliznyak from BNL said; “Normally to keep things simple, to describe the magnetism of the copper atoms, people tend to use a spin distribution based on isolated copper atoms. But in reality, the spin density must be spread out along the strong copper-oxygen covalent bonds that are part of the structure of the material and which are responsible for the remarkable magnetic properties in the first place.

“Once colleagues at Brookhaven had correctly calculated the real magnetic form factor for the copper atoms in this material, we found that we could get the exact match between the calculations from Jean Sebastien Caux and our neutron scattering data”.

Now the team has shown how to correctly compare theoretical models to experimental data, they are hoping that the hunt for the answer to high-temperature superconductivity in the cuprate materials can be reached more quickly.

It is widely believed that the magnetism of the copper atoms, which as this study shows is that of copper-oxygen covalent complexes, plays a vital role in superconductivity.

“Whilst we cannot sort out the differences for everyone, we think they should apply our method to their own situation. This could be a great help in narrowing down the range of possible explanations for high-temperature superconductivity”, said Perring.

It is thought that superconductivity could in the future be used for applications such as quantum computing.

The research was carried out using the Maps neutron spectrometer at the ISIS Pulsed Neutron and Muon Source and was published in Nature Physics Advance Online publication, 4 October 2009.

ISIS is a world-leading centre for research in physical and life sciences operated by the Science and Technology Facilities Council at the Rutherford Appleton Laboratory, Didcot, Oxfordshire, UK.

ISIS supports an international community of over 2000 scientists who use neutrons and muons for research in physics, chemistry, materials science, geology, engineering and biology. It is the most productive research centre of its type in the world.

Neutron scattering is a vital research and analysis technique in exploring the structure and dynamics of materials and molecules. It provides unique and complementary information to that available from synchrotron light sources.

The ISIS Second Target Station Project complements the facilities already operating at ISIS and enables the science programme to expand into the key research areas of soft matter, advanced materials and bio-science.

The Science and Technology Facilities Council ensures the UK retains its leading place on the world stage by delivering world-class science; accessing and hosting international facilities; developing innovative technologies; and increasing the socio-economic impact of its research through effective knowledge exchange partnerships.

The Council gives researchers access to world-class facilities and funds the UK membership of international bodies such as the European Laboratory for Particle Physics (CERN), the Institute Laue Langevin (ILL), European Synchrotron Radiation Facility (ESRF), the European organisation for Astronomical Research in the Southern Hemisphere (ESO) and the European Space Agency (ESA). It also contributes money for the UK telescopes overseas on La Palma, Hawaii, Australia and in Chile, and the MERLIN/VLBI National Facility, which includes the Lovell Telescope at Jodrell Bank Observatory.