UPTON, NY — Chemists at the U.S. Department of Energy’s Brookhaven National Laboratory have received three patents for developing catalysts to accelerate chemical reactions in fuel cells. The newly patented catalysts, as well as a method for making a particular type of catalyst with a thin layer of platinum, could greatly reduce the cost and increase the use of fuel cells in electric vehicles. The catalysts and the technique are available for licensing. 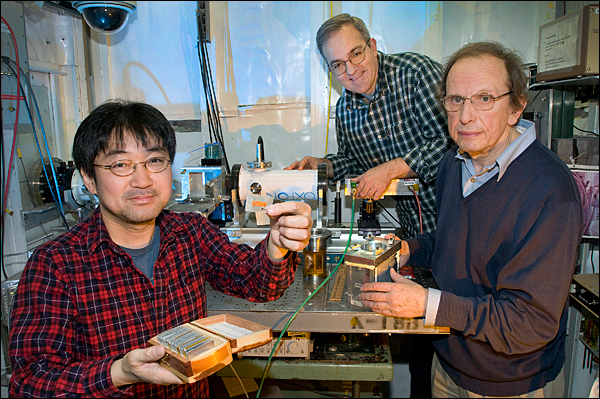 Platinum is the most efficient catalyst for fuel cells. However, the platinum-based catalysts are expensive, unstable, and have low durability. The newly patented catalysts have high activity and stability, while containing much less platinum than the amount used in current fuel cells, so their cost is reduced.

“Fuel cells are expected to become a major source of clean energy that can impact both transportation and stationary power sectors,” said Radoslav Adzic, the principal researcher in all three patents. “They have several advantages for automotive applications and can be used extensively in electric cars if the technology can be made to work efficiently and economically. Developing these electrocatalysts is a big step in that direction.”

Several types of renewable fuel – such as hydrogen, ethanol or methanol – may be used in fuel cells. A hydrogen fuel cell, for example, converts hydrogen and oxygen into water, and, in the process, produces electricity. Hydrogen is oxidized by separating into negatively charged electrons and positively charged ions with the help of a catalyst at the fuel cell’s negative pole, the anode. Electrons then travel to the positive pole, the cathode, creating electricity with their movement. At the cathode, with the aid of a catalyst, oxygen gains electrons, resulting in oxygen reduction, and combines with hydrogen ions forming water, the only byproduct of a hydrogen/oxygen fuel cell.

Compared to the patented platinum-palladium catalyst, the metal oxides combined with platinum are more stable and cost-effective, although the catalytic efficiency is not as high. Thus, the patented catalysts are complementary and can be tailored for various applications.

U.S. patent 7,691,780 B2 for the development of platinum-palladium catalysts, was issued to Brookhaven Lab’s Adzic and Miomir Branko Vukmirovic, along with Junliang Zhang and Yibo Mo, formerly of Brookhaven. Adzic, Vukmirovic and Kotaro Sasaki of Brookhaven Lab received title to U.S. patent 7,704,918 for metal oxide-platinum catalysts and their unique method of making them. Adzic and Zhang received U.S. patent 7,704,919 for adding gold clusters to platinum-based electrocatalysts.

The Department of Energy’s Office of Science and its Office of Energy Efficiency and Renewable Energy funded the research that led to these patented technologies. For information about licensing them, contact Kimberley Elcess at 631 344-4151, or elcess@bnl.gov.