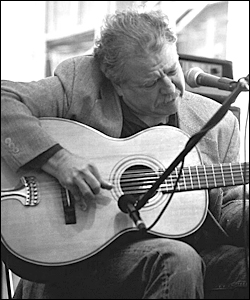 UPTON, NY — Acoustic bluesman Paul Geremia will give a concert at the U.S. Department of Energy's Brookhaven National Laboratory on Friday, June 18, at 8 p.m. at the Brookhaven Center. Sponsored by the BNL Music Club, the concert is open to the public. All visitors to the Laboratory 16 and older must bring a photo I.D.

In the 1960s, inspired by the folk music boom, Paul Geremia picked up his first harmonica. Soon after, he began learning guitar. After leaving agricultural college, he picked up gigs in coffee houses and on college campuses. During these years he crossed paths with people who greatly influenced his career ─ early blues and folk legends Woody Guthrie, Skip James, Howlin’ Wolf, and Pink Anderson, to name a few.

Geremia’s harmonica and piano playing, combined with his fingerpicking talent on six- and twelve-string guitars and his husky, soulful voice, has earned him accolades thorough out the United States and Europe. Wanting to keep traditional acoustic blues alive, Geremia has never switched to electric. He has recorded 10 solo albums and appeared on numerous compilation discs.

Tickets for the concert are $15 in advance and $20 the day of the show. Tickets may be purchased through www.ticketweb.com or at the door. Advance ticket purchase is recommended.

For more information on Paul Geremia, go to www.paulgeremia.org.