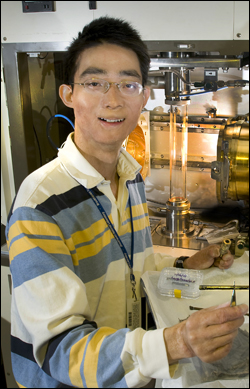 Wen is one of 23 winners in the Northeast U.S. to receive the 2009 award, which includes a $5,000 prize and a certificate. The China Scholarship Council gives these awards annually to recognize the academic merit and research accomplishments of exceptional, self-financed — not government-financed — students from China who are pursuing doctoral degrees in foreign countries. The awards will be given at the Chinese Consulate in New York City in June of 2010.

At Brookhaven Lab, Wen is a member of the Neutron Scattering Group in the Condensed Matter Physics and Materials Science Department. He is also a part of the Lab's Energy Frontier Research Center — the Center for Emergent Superconductivity — a DOE Office of Science initiative to make alternative and renewable energy viable as large-scale replacements for fossil fuels.

Wen focuses his research on unique materials and their properties. In particular, he works with superconductors — materials that conduct electricity without any resistance, so that no energy is wasted. With 100 percent efficiency, superconductors are a promising piece in solving the nation's energy challenges.

"We are quite proud, though not surprised, that Jinsheng has won this award," said John Tranquada, a senior physicist at Brookhaven Lab and one of Wen's mentors. "He has been an extremely productive student and is a credit to the Center for Emergent Superconductivity, the energy frontier research center through which he is supported."

"This is a prestigious award for Chinese graduate students around the world," added Genda Gu, a Brookhaven physicist who is also Wen's mentor. "Jinsheng has made a number of original and innovative contributions that have major impact and significance in the superconductivity and ferroelectric fields. He is growing into an exceptional young scientist."

Wen has already won numerous awards and has also authored or coauthored 20 papers, some of which have been published in Science, various Nature journals, Physical Review Letters, Applied Physics Letters, Physical Review B, and the Journal of Crystal Growth.

Wen expects to receive his Ph.D. in materials science from Stony Brook University during the summer of 2010. He was previously featured here.