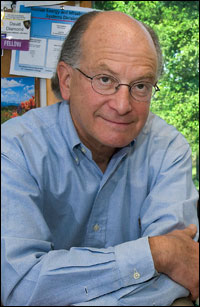 UPTON, NY — David Diamond, a senior scientist at the U.S. Department of Energy’s Brookhaven National Laboratory, has been chosen to receive the 2010 Tommy Thompson Award from the American Nuclear Society (ANS). Named in honor of Theos J. Thompson (1918 – 1970), a Massachusetts Institute of Technology professor and a member of the Atomic Energy Commission who made important contributions to nuclear reactor safety, the award recognizes individuals who have “provided outstanding wisdom and direction to key elements of world nuclear safety activities.” Diamond will receive the award, which consists of a plaque and $1,000, at an ANS meeting in San Diego on June 15.

“I am honored to receive this award,” Diamond said. “Also, I honor the contributions and dedication of colleagues throughout my long and rewarding career at Brookhaven Lab. Their dedication and camaraderie provide the motivation for me to come to work every day.”

Diamond is a consultant on safety, design and related technical aspects of nuclear reactors, primarily for the U.S. Nuclear Regulatory Commission, but he has also been a consultant for other nuclear regulatory agencies around the world, with a particularly long relationship with the Canadian Nuclear Safety Commission. He does computer simulations to show how nuclear power reactors function under various transient and hypothetical accident conditions — crucial information to assure the safety of these power plants. Currently, there are 104 power reactors in operation in the U.S. and 22 in Canada. Diamond also has provided technical support for the National Institute of Standards and Technology’s research reactor in Gaithersburg, Maryland, one of about 40 research reactors in the U.S.

As head of Brookhaven Lab’s Nuclear Energy and Infrastructure Systems Division (NEISD), Diamond oversees 25 employees who analyze factors in nuclear energy systems that affect their safety. His staff includes civil, nuclear, mechanical, electrical, and human performance engineers. Recently, his division has taken on research in a new area: small reactors with about one-tenth of the power of currently operating power reactors. These proposed reactors of the future are designed to be more economical than the current generation of larger ones.

“There has been a renaissance in nuclear energy in the last few years,” Diamond said. “We hope Brookhaven Lab will be actively involved in the design and safety issues in this frontier area.”

After earning a Ph.D. in nuclear engineering from the Massachusetts Institute of Technology, Diamond joined Brookhaven Lab as an assistant nuclear engineer in 1968. He rose through the ranks to become division head of NEISD in 2001. Diamond is a Fellow of the ANS.