Jebus and Memphis Crawl also to appear at this show 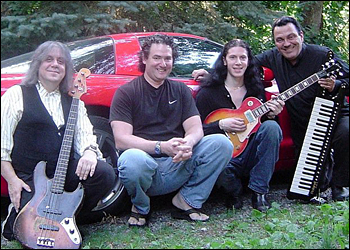 UPTON, NY — Legendary band Rat Race Choir (RRC) will perform at the U.S. Department of Energy's Brookhaven National Laboratory on Friday, August 6, at 8 p.m. at Berkner Auditorium. Sponsored by the BNL Music Club, the concert is open to the public. All visitors to the Laboratory 16 and older must bring a photo I.D.

Formed in 1968, RRC hails from Westchester, New York. However, their presence on eastern Long Island at venues in Southampton and Mitty’s General Store in Water Mill has made them well known on the Long Island music scene. This progressive rock band has been performing their own musical compositions as well as classic rock songs from well-known rockers like Jethro Tull and Led Zeppelin. In the early 1970s the band was joined onstage by John Entwistle of The Who.

Dave Chmela, bassist and songwriter, is an original founding member of RRC. He is also a vocalist and his musical influences include Bob Marley to Alan Holdsworth. He also plays keyboards and is a great fan of classical composer George Frederic Handel.

Craig Weinberg picked up a guitar at the age of five and hasn’t put it down since. He realized his dream when he had the opportunity to become a member of RRC 14 years ago.

Larry McGowan first trained on piano and then became a church organist before joining the band in 1969. His entertaining on-stage antics make him a favorite to watch. His inspirations include Mike Pinder of the Moody Blues, Billie Holiday, Big Band sounds, as well as Chopin.

Adam Snyder also brings his share of talent to the band. He first started rehearsing with RRC in 2002. He has performed with many legendary musicians, including Billy Joel and Neil Sedaka. In addition to his percussion and vocal skills, Snyder can play bass and piano.

Tickets for the concert are $20 and may be purchased through TicketWeb or at the door. Advance ticket purchase is recommended.