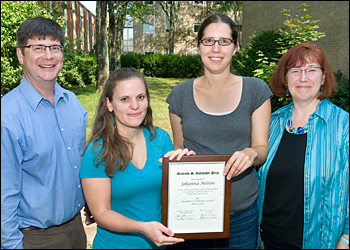 UPTON, NY — Johanna Nelson, a Stony Brook University (SBU) graduate student, has been awarded the 2010 Gertrude Scharff-Goldhaber Prize, consisting of a framed certificate and $1,000. Currently funded by Brookhaven Science Associates, the company that manages Brookhaven National Laboratory for the U.S. Department of Energy, the award was established in 1992 by Brookhaven Women in Science (BWIS), a nonprofit organization that supports and encourages the advancement of women in science.

The award recognizes substantial promise and accomplishment by women graduate students in physics who are performing their thesis research at Brookhaven Lab, or who are enrolled at Stony Brook University. It commemorates the outstanding contributions of the late nuclear physicist Gertrude Scharff-Goldhaber. In 1950, she became the first woman Ph.D. physicist appointed to the Brookhaven Lab staff. She also was a founding member of BWIS.

Nelson earned a B.S. in physics and mathematics from Muhlenberg College, Allentown, Pennsylvania, in 2005, and she expects to earn a Ph.D. in physics from SBU in August of this year. Her research involves viewing the sub-cellular structure of cells, such as yeast cells, on the nano-scale using an imaging technique called x-ray diffraction microscopy at Lawrence Berkeley National Laboratory’s Advanced Light Source. Nelson will continue in this field of basic research with a postdoctoral position at Stanford University.