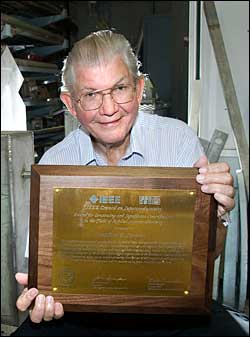 UPTON, NY — William Sampson, a senior physicist at the U.S. Department of Energy’s Brookhaven National Laboratory, has received the IEEE Council on Superconductivity Award for Significant and Sustained Contributions in the Field of Applied Superconductivity. For 48 years, Sampson has helped to design and build superconducting magnets that keep particle beams circulating in accelerators, such as Brookhaven Lab’s Relativistic Heavy Ion Collider (RHIC). He received the award, which consists of a plaque; a medallion made of niobium, a superconducting material; and $5,000, on August 2, at the Applied Superconductivity Conference in Washington, D.C.

“I’m glad that my contributions to the development of superconducting magnets are being recognized,” Sampson said. “I hope to continue to contribute to the field for many years to come.”

Superconducting magnets are made of conductors that can carry electric current without power dissipation at very low temperatures. In particular, the IEEE honored Sampson for his contributions to the field of large-scale superconductivity. In the 1960s, he built some of the first superconducting magnets to exceed 10 Tesla, 200,000 times the earth’s magnetic field.

Sampson also made early models of dipole and quadrupole magnets, used for bending and focusing beams of particles in accelerators. Accelerators around the world, including RHIC and the Large Hadron Collider (LHC) at CERN, the European Organization for Nuclear Research, have benefited from this pioneering work.

In the 1970s, Sampson made magnets called “wigglers” for the NSLS, which began operating in 1982. Annually, about 2,300 scientists use x-rays, infrared and ultraviolet light at the synchrotron to study materials as diverse as computer chips and viruses. Wiggler magnets force the electron beam in a light source to move, or wiggle, due to high local magnetic fields, giving rise to increased energy in the emitted light. This type of magnet will also be used in the Laboratory’s NSLS-II, a light source 10,000 times brighter than the NSLS, now under construction and due to be in operation by 2015.

Sampson has also worked on high-temperature superconducting magnets that can operate in high radiation environments, such as the future U.S. Department of Energy-funded Facility for Rare Isotope Beams (FRIB), a nuclear physics facility that will be operated by Michigan State University. FRIB is expected to provide scientists with information about the properties of rare isotopes – short-lived nuclei not normally found on earth – that should help them to better understand the origin of elements and evolution of the cosmos.

Currently, Sampson is developing very high-field superconducting magnets that may be used in building a high-energy muon collider. A team of physicists is examining the feasibility of such a collider, which would enable scientists to make detailed studies of particles found at the LHC.

After earning a Ph.D. in physics from the University of Toronto in 1962, Sampson joined Brookhaven Lab as an assistant physicist. He was promoted to physicist in 1967 and to senior physicist in 1977.