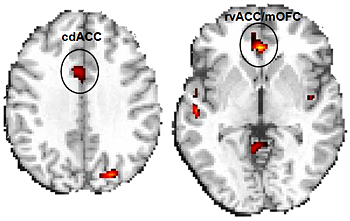 Methylphenidate normalizes functional magnetic resonance imaging cingulate responses and reduces impulsivity on a salient cognitive task in individuals with cocaine addiction. Above is an axial map that shows the caudal dorsal anterior cingulate (cdACC) and rostroventromedial anterior cingulate (extending to the medial orbitofrontal cortex, rvACC/mOFC) — cortical regions that showed enhanced responses to methylphenidate as compared to placebo in cocaine addicted individuals. These regions are crucial for the ability to regulate behavior, cognition and emotion.

UPTON, NY — A brain-scanning study at the U.S. Department of Energy’s (DOE) Brookhaven National Laboratory, conducted with collaborators from Stony Brook University, reveals that an oral dose of methylphenidate, commonly known as Ritalin, improves impaired brain function and enhances cognitive performance in people who are addicted to cocaine. The study — to be published in the Proceedings of the National Academy of Sciences the week of September 6, 2010 — suggests that methylphenidate, combined with cognitive interventions, may have a role in facilitating recovery from drug addiction.

“Previous studies have shown that methylphenidate does not decrease cocaine use or prevent relapse in addicted individuals, so it wouldn’t work to treat cocaine addiction directly, the way methadone works to treat heroin abuse,” said Rita Z. Goldstein, a psychologist who leads the neuropsychoimaging group at Brookhaven Lab. “But other studies show that methylphenidate does decrease behaviors such as risk taking and impulsivity and improves brain function and cognitive performance in a range of other conditions that also affect the brain’s prefrontal cortex, including attention deficit hyperactivity disorder (ADHD), some forms of dementia, and certain kinds of brain injury. If it also has these positive effects in cocaine-addicted individuals, then it could be a useful component of a treatment strategy that helps increase recovering addicts’ impulse control.”

To find out, Goldstein’s group performed functional magnetic resonance imaging (fMRI) on 13 cocaine users and 14 healthy control subjects who were asked to perform a cognitive task after being given either a low oral dose of methylphenidate (20 milligrams) or a placebo. The task involved pushing a button to correctly identify the color of a printed word; some words had to do with drug use, others were “neutral.” Subjects received monetary rewards for correct answers.

The scientists were particularly interested in two parts of the prefrontal cortex previously shown to be impaired during this cognitive activity in cocaine-addicted individuals. “These regions help to regulate emotion, cognition, and behavior in response to salient stimuli — the things we find particularly interesting or relevant,” Goldstein said. “Because drug users have deficits in these regions, they may have less ability to regulate their emotions and exert cognitive control over certain behaviors.”

Compared with cocaine users given placebos — who (compared to healthy controls) exhibited reduced function in these prefrontal cortex regions — cocaine users given a low dose of methylphenidate had improved brain function such that they were more like the healthy control subjects. The subjects given methylphenidate were also less likely to make “errors of commission” (pressing a button incorrectly or prematurely), a measure of impulsivity, while performing the cognitive task than subjects given a placebo. Furthermore, the greater the improvement in task accuracy with methylphenidate, the larger the increase in fMRI signal in the prefrontal cortex regions of interest, showing that the improvements in brain function were directly related to improved cognitive performance.

“Future studies need to evaluate whether these results can be generalized to other tasks or activities that involve these specific brain regions,” Goldstein said. “But these results do suggest that by enhancing prefrontal cortex function and associated cognitive performance — particularly the decrease in impulsivity — methylphenidate could help to improve clinical outcomes in people seeking to overcome drug addiction.”

This research was funded by the National Institute on Drug Abuse (NIDA) and Stony Brook University’s General Clinical Research Center, with infrastructure support coming from the DOE Office of Science. In addition to Goldstein, co-authors on this study were: Patricia Woicik, Thomas Maloney, Nelly Alia-Klein, Ruiliang Wang, and Gene-Jack Wang of Brookhaven Lab; Dardo Tomasi and Frank Telang of the National Institute on Alcohol Abuse and Alcoholism (NIAAA); Juntian Shan, Jean Honorio, and Dimitris Samaras of Stony Brook University’s Department of Computer Science; and Nora Volkow of NIAAA and NIDA.