UPTON, NY — Ping Cao, a chemistry graduate student at Stony Brook University has won the sixth annual Dr. Mow Shiah Lin Scholarship. The Asian Pacific American Association (APAA) at the U.S. Department of Energy’s Brookhaven National Laboratory sponsors the scholarship, which consists of $1,000 and a plaque, to honor the distinguished late Brookhaven Lab scientist for whom it was named. 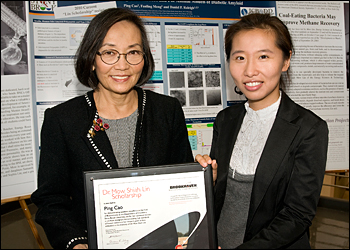 Cao is studying the formation of amyloids, toxic deposits formed by various proteins in numerous human diseases. In particular, Cao is investigating the mechanism in the formation of islet amyloid polypeptide, a protein that plays an important role in the development of diabetes, and designing amyloid inhibitors for potential therapeutic use.

“I am honored to receive the Dr. Mow Shiah Lin Scholarship,” Cao said. “I cherish the opportunity to do research with world-leading experts in my field at Stony Brook University. My career goal is to develop an independent research program focused on molecular medicine.”

Cao earned a B.S. in chemistry in 2005 and an M.S. in biology and pharmaceutical biotechnology in 2007 from Nanjing University in China. She enrolled in the graduate program in chemistry at Stony Brook University in 2007, and she expects to receive her Ph.D. in 2012.