Recognized for his work developing radiotracers for biomedical imaging, mentoring and outreach 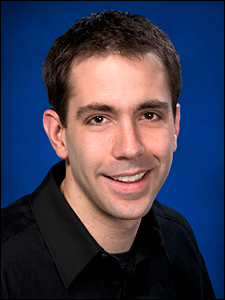 UPTON, NY — Jacob Hooker, an assistant chemist at the U.S. Department of Energy’s (DOE) Brookhaven National Laboratory and Director of Radiochemistry at the Athinoula A. Martinos Center for Biomedical Imaging, has been named by President Obama as a recipient of the Presidential Early Career Award for Scientists and Engineers.

Hooker, who has worked to develop new kinds of chemicals used in biomedical imaging (see links below), was among 85 scientists and engineers supported by 10 federal departments and agencies, to receive the award this year. Hooker is among 13 awardees supported by DOE. Recipients are recognized both as leading research at the frontiers of their field and serving their community through outreach and education.

“Science and technology have long been at the core of America’s economic strength and global leadership,” President Obama said. “I am confident that these individuals, who have shown such tremendous promise so early in their careers, will go on to make breakthroughs and discoveries that will continue to move our nation forward in the years ahead.”

“These gifted young scientists and engineers represent the best in our country,” said Energy Secretary Steven Chu. “The awards recognize ingenuity, dedication, diligence and talent. I congratulate the 2009 PECASE awardees and wish them continued success towards new discoveries and advances in science, energy research, and national security.”

Each Presidential Award winner received a citation, plaque, and continued funding from their agency for up to five years, provided by the DOE’s Office of Science and the National Nuclear Security Administration, depending on the field of research.

“It’s an amazing honor and somewhat unbelievable to me at this stage in my career,” Hooker said upon hearing of the award. “That I could be recognized is largely a result of the radiotracer and biomedical imaging program at Brookhaven. I give Joanna Fowler, who leads the group, and the program a lot of the credit for this award. Brookhaven is an amazing place to do science.”

Hooker, an organic chemist, is being recognized for his work in adapting modern synthetic chemistry to create new tools for studying the chemistry of living systems. Working from basic chemical principles, Hooker has focused his research on advancing fundamental radiochemistry and developing new radio-labeled compounds for biomedical imaging.

“It’s really important that there’s still an appreciation and recognition of basic science,” Hooker said, meaning research aimed at discovering basic scientific principles rather than driven by predetermined applications. “It’s very rewarding and fulfilling to know that people do make note of these advances.”

Hooker’s research has already led to important advances, including fast reaction systems for labeling formaldehyde and other carbon-containing compounds that could have benefits for the study of human diseases such as cancer.

The award also recognizes Hooker’s efforts to share his knowledge through outreach work and mentoring of visiting students and scholars.

In addition to his appointment at Brookhaven National Laboratory and position at the Martinos Center for Biomedical Imaging, Hooker is an associate director of the PET [positron emission tomography] Core at the Massachusetts General Hospital and an assistant professor at Harvard Medical School. He received B.S. degrees in Chemistry and Textile Chemistry at North Carolina State University and his Ph.D. in Chemistry from the University of California, Berkeley. He has won several scholarships and teaching awards and was a Distinguished Goldhaber Fellow at Brookhaven National Laboratory. In 2009, Battelle honored Hooker as Brookhaven National Laboratory’s “Inventor of the Year.” Hooker has co-authored 29 peer-reviewed papers and his research has been highlighted in scientific news briefs and popular media.