Peter Johnson discusses the mystery of superconductivity and the field's importance to energy research.

Johnson will receive the award at the 2011 APS March meeting in Dallas, Texas along with Zhi-Xun Shen of SLAC National Accelerator Laboratory and Juan Carlos Campuzano of Argonne National Laboratory. The prize honors them for “innovation in angle-resolving photoemission spectroscopy, which advanced the understanding of the cuprate superconductors, and transformed the study of strongly correlated electronic systems.”

“This was a very pleasant surprise and the fact that they awarded this prize to all three of us was also a pleasant surprise — we’ve all been very competitive for a long time,” Johnson said. “It is an honor for myself, my group, and the Laboratory to receive this recognition from the larger community.” 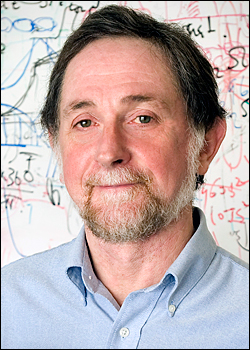 Johnson has worked with various forms of photoemission spectroscopy, including inverse (time-reversed), spin-polarized, and high-resolution photoemission spectroscopy. It is this last variant for which he is being honored. The techniques that Johnson helped develop have provided more insight than any other into one of the major challenges of modern physics, namely strongly correlated electronic materials.

In the second half of the 1980s, a new class of materials was discovered that could conduct electricity with no resistance to the flow of electrons. This property, called superconductivity, had been observed previously, however, the new materials could superconduct at higher temperatures than ever before achieved.

Although there is no agreement in the field as to the mechanism responsible for high-temperature superconductivity, the materials are already being put to the test in energy applications. These include superconducting wire to improve existing energy grids and superconducting coils for storing power from energy sources such as solar panels.

Johnson, the Chair of Brookhaven’s Condensed Matter Physics & Materials Science Department, received his Ph.D. in physics at Warwick University in 1978. Following graduation, he worked at Warwick and Bell Laboratories until 1982, when he joined Brookhaven. Named a senior physicist in 2000, he became the Acting Associate Chair of Brookhaven’s Physics Department in 2003, and Deputy Chair of the Condensed Matter Physics & Materials Science Department in 2006. He became Chair a year later. He leads the electron spectroscopy group at Brookhaven, and received the Laboratory’s Science and Technology award in 2001. Johnson is a Fellow of the American Association for the Advancement of Science, the American Physical Society, and the Institute of Physics in the United Kingdom. He is the author of more than 160 peer-reviewed scientific papers.