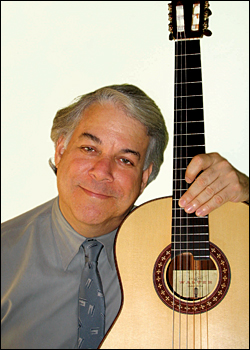 UPTON, NY — Guitarist David Starobin will perform at the U.S. Department of Energy's Brookhaven National Laboratory on Wednesday, December 15, at noon in Berkner Hall. Sponsored by Brookhaven Science Associates, the concert is free and open to the public. All visitors to the Laboratory age 16 and older must bring a photo I.D.

Soundboard magazine recently wrote that Starobin is "arguably the most influential American classical guitarist of the twentieth century." Composers, including Elliott Carter, George Crumb, Lukas Foss, and Milton Babbitt have dedicated new works to David Starobin, producing a repertoire of more than 350 new scores. He has performed these works throughout the world, collaborating with ensembles including the New York Philharmonic, San Francisco Symphony, Chamber Music Society of Lincoln Center, and the Emerson and Guarneri Quartets. Starobin's recordings have received numerous honors, including three Grammy nominations.

David Starobin began his guitar studies with the Puerto Rican guitarist Manuel Gayol. While a student at the Peabody Conservatory of Music, he worked closely with pianist Leon Fleisher, and was a frequent participant in the Marlboro Music Festival. Between 1993 and 2004 Starobin was the chairman of the guitar department at the Manhattan School of Music, where he currently teaches. In 1981, Starobin founded Bridge Records, Inc. His work for Bridge as performer, producer, and executive producer has earned three Grammy awards and 20 Grammy nominations. At the Lab, David Starobin will perform original works for guitar, ranging from Etudes by Sor to five American Preludes in rag and blues idioms.