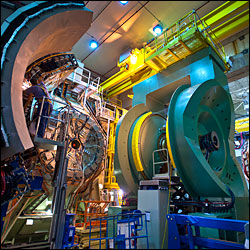 UPTON, NY — The U.S. Department of Energy’s (DOE) Brookhaven National Laboratory has been named the number one institution in the world for hadron collider research — research that explores the very earliest moments of the universe, the most fundamental particles of matter, and the forces through which they interact by colliding particles such as protons and heavy ions at very high energies.

The ranking, compiled by ScienceWatch.com based on number of citations of scientific papers, notes that the list of top “hadron collider” papers over the past decade “is dominated by the physics from RHIC” — Brookhaven’s Relativistic Heavy Ion Collider, where collisions of gold ions have produced a seething quark-gluon plasma 250,000 times hotter than the center of the sun. Four of the top-five papers describe research at RHIC that revealed the surprising liquid nature of the early universe.

“RHIC has been an incredibly productive facility since it began colliding ions in 2000, with more than 300 scientific publications to date,” said Steven Vigdor, Brookhaven’s Associate Laboratory Director for Nuclear and Particle Physics. “As a dedicated facility for nuclear physics research with the ability to collide a wide range of ions — as well as a unique ability to collide polarized protons — RHIC will continue to be a leader in this field for many years to come.” 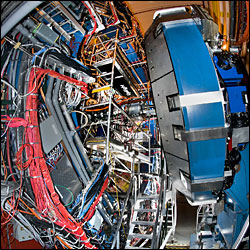 Brookhaven scientists also contribute to research conducted at several of the other top-20 institutions named by ScienceWatch. For example, at CERN, the European laboratory for particle physics research, Brookhaven played a pivotal role in the design and construction of the ATLAS detector at the Large Hadron Collider (LHC), and serves as the host laboratory for the U.S. ATLAS collaboration. The RHIC/ATLAS computing facility (RACF) at Brookhaven stores, distributes, and analyzes vast amounts of data from both facilities. Brookhaven scientists also helped to build pieces of the D Zero detector at Fermilab’s Tevatron collider, and made significant contributions to the experiment’s software, computing, and performance. Additionally, the Lab hosts scientists and students from many of the universities listed, including nearby Stony Brook University, which together with Battelle, manages the Lab for the Department of Energy.

“These rankings illustrate the vitality of hadron research and also the extraordinarily collaborative nature of this research,” Vigdor said. “All of this work relies on large-scale experiments that could not be built by any single institution, requires expertise in a range of fields, and funding from a variety of sources. And each of these facilities takes many years to build. So it’s natural that we work together across national borders, as a global community in many ways, to plan and carry out our research so that our findings will be complementary and build upon the overall body of knowledge about this exciting area of science.”

ScienceWatch.com, a division of the Thomson Reuters organization, provides one of the largest available databases for scientific papers and citations in the world. It is a behind-the-scenes look at the information selected by Essential Science Indicators (ESI), a compilation of statistical information (publication, citation, and cites-per-paper) for scientists, institutions, countries and journals.

The scientific papers and citations used for this database were published between January 1, 2000 and June 30, 2010. This analysis was created using the Web of Science® from Thomson Reuters. See the ScienceWatch website for more information on the ScienceWatch analysis of hadron collider research. In the coming weeks, interviews with several key RHIC scientists will be posted on this site.

Research at RHIC is funded primarily by the U.S. Department of Energy’s Office of Science. See BNL's website for a complete list of RHIC funders.