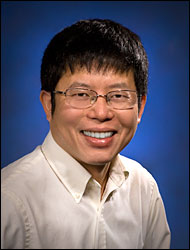 EVENT: When an international team of scientists working at the Relativistic Heavy Ion Collider (RHIC) announced the discovery of the most massive antinucleus to date — and the first containing an anti-strange quark — it marked the first entry below the plane of the classic Periodic Table of Elements, and sparked enormous interest worldwide. Dr. Zhangbu Xu, a physicist at the U.S. Department of Energy’s (DOE) Brookhaven National Laboratory, where the 2.4-mile circular “atom smasher” is located, will share this discovery with a wider audience at this year’s meeting of the American Association for the Advancement of Science (AAAS).

BACKGROUND: All ordinary nuclei are made of protons and neutrons (which in turn contain only up and down quarks). The standard Periodic Table of Elements is arranged according to the number of protons, which determine each element’s chemical properties. There is also a more complex, three-dimensional chart that conveys information about the number of neutrons, which may change in different isotopes of the same element, and a quantum number known as “strangeness,” which depends on the presence of strange quarks. Nuclei containing one or more strange quarks are called hypernuclei. For all ordinary matter, with no strange quarks, the strangeness value is zero and the chart is flat. Hypernuclei appear above the plane of the chart.

The diagram above is known as the 3-D chart of the nuclides. The familiar Periodic Table arranges the elements according to their atomic number, Z, which determines the chemical properties of each element. Physicists are also concerned with the N axis, which gives the number of neutrons in the nucleus. The third axis represents strangeness, S, which is zero for all naturally occurring matter, but could be non-zero in the core of collapsed stars. Antinuclei lie at negative Z and N in the above chart, and the newly discovered antinucleus (magenta) now extends the 3-D chart into the new region of strange antimatter.

Last year, members of the STAR detector collaboration at RHIC published evidence of a form of strange antimatter with an anti-strange quark — an antihypernucleus — making it the first entry below the plane of the 3D chart of nuclides, laying the first stake in a new frontier of physics.

Collisions at RHIC fleetingly produce conditions that existed a few microseconds after the Big Bang, which scientists believe gave birth to the universe as we know it some 13.7 billion years ago. In both nucleus-nucleus collisions at RHIC and in the Big Bang, quarks and antiquarks emerge with equal abundance. Nuclear collisions are unique and distinct from elementary particle collisions because they deposit large amounts of energy into a more extended volume. In contrast to the Big Bang, the small amount of energy in nuclear collisions produces negligible gravitational attraction, which allows the resulting quark-gluon plasma to expand rapidly and to cool down and transition into a hadron gas, producing nucleons and their antiparticles.

At RHIC, among the collision fragments that survive to the final state, matter and antimatter are still close to equally abundant, even in the case of the relatively complex antinucleus and its normal-matter partner featured in the present study. In contrast, antimatter appears to be largely absent from the present-day universe.

The STAR team has found that the rate at which their heaviest antinucleus is produced is consistent with expectations based on a statistical collection of antiquarks from the soup of quarks and antiquarks generated in RHIC collisions. Extrapolating from this result, the experimenters believe they should be able to discover even heavier antinuclei in upcoming collider running periods. The most abundantly produced antimatter next in line for discovery is the antimatter Helium-4 nucleus, also known as the antimatter α (alpha) particle.

The STAR collaboration is composed of 54 institutions from 13 countries. Research at RHIC is funded primarily by the U.S. Department of Energy’s Office of Science, Office of Nuclear Physics, and by various national and international collaborating institutions.