Brookhaven Lab is Crucial for State and Local Economic Growth

UPTON, NY — Brookhaven National Laboratory has a significant impact on the economy of Long Island and New York State, according to a report issued by Appleseed, a Manhattan-based consulting firm. The report, titled “Meeting National Needs, Creating Opportunities for Growth,” can be viewed at www.bnl.gov/economic. For a print copy, call (631) 344-3129. 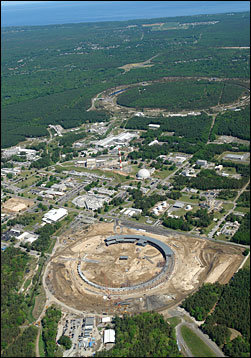 An aerial view of Brookhaven National Laboratory taken in 2010. The National Synchrotron Light Source II can be seen under construction in the foreground and the Relativistic Heavy Ion Collder (RHIC) is visible in the disatnce.

The Appleseed report covers fiscal year (FY) 2009, which includes the period October 1, 2008 to September 30, 2009. During that period, the economic output generated by Brookhaven Lab and its visitors amounted to $704 million, and the Lab created 5,400 jobs throughout New York State — 5,190 of them on Long Island. Supporting local and state businesses whenever possible, Brookhaven Lab also spent $212 million on purchases of goods and services in FY2009; $75.2 million of this total was spent in New York State, including $62.7 million on Long Island.

“Brookhaven National Laboratory is a major Long Island employer, and it brings hundreds of millions of dollars in federal research funding into the region every year,” said Hugh O’Neill, President of Appleseed. “But even more valuable in the long run is the Laboratory’s role in strengthening Long Island’s position as a major center of innovation in energy, the life sciences, and other fields that are crucial to the growth of the region’s — and New York State’s — economy.”

Brookhaven Lab Director Sam Aronson said, “This report from Appleseed shows that the Laboratory is a major source of jobs and has tremendous economic significance for Long Island and New York State. Brookhaven Lab is one of the largest employers in Suffolk County, and together with Stony Brook University and Cold Spring Harbor Laboratory, we are helping Long Island to remain a leader in science and technology.”

Owned and funded primarily by the U.S. Department of Energy (DOE), Brookhaven Lab is one of New York State’s largest scientific research centers. Located on a 5,300-acre site in central Long Island, the Laboratory employs more than 3,000 full-time workers and is host to just as many visiting researchers each year from universities, industry, and governmental agencies that use its world-class facilities. Home to seven Nobel Prizes, the Laboratory conducts basic and applied research in the physical, biomedical and environmental sciences, as well as energy technologies and national security.

Mike Holland, manager of DOE’s Brookhaven Site Office, said, “The Department of Energy’s mission at Brookhaven is to support cutting-edge science and research and to marshal the brightest minds to discover and deliver new solutions to our nation’s challenges. This strategic investment encourages innovation, promotes prosperity, and enhances our national security.”

During FY 2009, the Laboratory’s total funding was $573 million, of which about 96 percent came from DOE and other federal agencies. At that time, Brookhaven Lab employed 2,893 people, and the Lab’s annual payroll totaled $250 million. From 2006 to 2009, when New York State and Long Island were losing jobs, the Lab’s workforce grew by 12 percent.

The Appleseed report provides statistics on Brookhaven Lab’s direct spending as well as secondary economic impacts of spending, also known as the “ripple effect.” The report’s highlights include:

Provided that federal funding is sustained, the Lab’s state and local impact is expected to be even greater within the next decade. The planned construction of new state-of-the-art facilities, such as the National Synchrotron Light Source II, will enable scientists to perform research to address national challenges in energy, medicine, environmental science, and other crucial areas. Also, Brookhaven Lab has made a strong commitment to increasing its capacity to bring its discoveries that have commercial value to the marketplace. Between 2004 and 2009, Brookhaven Lab’s technologies generated $42 million in gross licensing revenue. Currently, about 100 technologies at the Laboratory are available for licensing.

Comments from Elected Officials and Community Leaders on the Appleseed Report

“This report is proof positive of something many of us in New York have known for a long time — that Brookhaven National Laboratory is a cornerstone of Long Island’s job-creating high-tech economy. I will continue to lead the fight with my colleagues in the New York delegation who support growing research, jobs and innovation on Long Island, not shrinking it.”

“This report demonstrates the vital role Brookhaven National Lab plays in our regional economy. That is why I am publicly voicing my support for the Lab’s 3,000 hard-working employees to ensure they have a voice in Washington during the budget process. As the saying goes — ‘what’s good for BNL is good for America’ — and I’d add, great for Long Island.”

“Brookhaven National Lab’s contributions to science, innovation and the local economy are indisputable. We must, as I have advocated for during the last dozen or more years, give the economic engine triumvirate — Brookhaven Lab, Stony Brook University, and Cold Spring Harbor Lab — the means to create public/private partnerships that will create small-business start-ups and jobs.”

“The Appleseed report confirms what most of us already knew: Brookhaven National Laboratory is a major part of the Long Island economy. The high tech jobs and innovations created by BNL are the future of Suffolk County. It’s imperative that we not be pennywise and pound foolish; continued and enhanced funding for the Lab is essential to the growth of the entire region.”

“Long Island is proud to be home to Brookhaven National Laboratory with its international reputation as a research facility. BNL is an incredible regional economic powerhouse for the Island and the State — as this report shows — and is one of the pillars of our ‘Accelerate Long Island’ initiative. Thus, a strong BNL is crucial to Long Island’s economic future, and the LIA looks forward to working with the Lab and our congressional delegation to ensure BNL continues to get the federal support it deserves.”