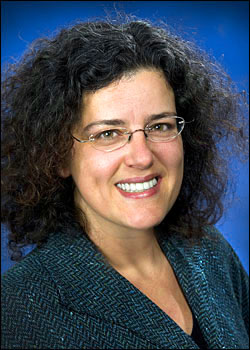 UPTON, NY — Nelly Alia-Klein, a scientist at the U.S. Department of Energy’s Brookhaven National Laboratory, will be honored for her accomplishments in science at Brookhaven Town’s 25th Annual Women’s Recognition Night on March 22, at 6:30 p.m. at Town Hall in Farmingville. She will be among 13 women honored for their contributions to various fields in a public ceremony to celebrate the significant achievements of local women during Women’s History Month.

Initially trained as a clinical psychologist, with expertise in forensic psychology, Alia-Klein has specialized in neuroimaging, together with DNA and behavioral analyses, to study the mechanisms that underlie aggression and violent behavior. “A clinical term for violent behavior is ‘intermittent explosive disorder,’” said Alia-Klein. “The disorder is described as overwhelming anger that is disproportionate relative to the provocation, which results in damaging behavior, including physical assault, damage to property, and trauma to others. This behavior is relatively rare in the general population, but it tends to be repetitive and long-lasting in the people who have the diagnosis.”

The legal system is working to ensure accountability for those who act out on their impulses to behave violently. However, treatment to prevent such behavior is limited and underutilized. While therapies and certain medications have been tested to control the propensity to act out violently to perceived provocation, Alia-Klein says they are not readily available or frequently sought by those affected. “The disorder is both understudied and undertreated,” Alia-Klein said. “I advocate more infrastructure support and funding for researchers to study violence in our society. While there are organizations that are funded to study mental health illnesses such as schizophrenia and drug addiction, there is no organization devoted to the study of those prone to violence. I am thankful that Brookhaven Town has recognized my work in this area, and I hope that more scientists will become interested in this field.”