PLEASE NOTE: Originally scheduled for 4 p.m. in Berkner Hall, this lecture has been rescheduled for 2:30 p.m., in the Hamilton Seminar Room, Bldg. 555.

Talk on Robots and the Future of Surgery to be Held at Brookhaven Lab, April 21 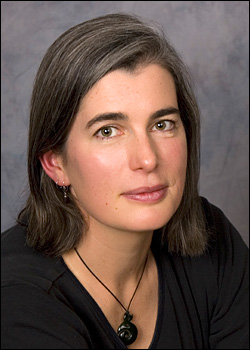 UPTON, NY — Catherine Mohr, director of medical research at Intuitive Surgical, Inc., a high technology surgical robotics company, will give a talk titled “From Surgeons to Superheroes — How Robots Can Change the Future of Surgery” at the U.S. Department of Energy’s Brookhaven National Laboratory on Thursday, April 21, at 4 p.m. in Berkner Hall. Sponsored by Brookhaven Women in Science, the talk is free and no registration is required. All visitors to the Laboratory age 16 and over must bring a photo ID.

The success of surgical robots depends heavily on the high quality three-dimensional capture of clinical images and the subsequent display of this clinical information to the surgeon. Until recently, these images were limited to reflected white light images, replicating what the surgeon could see. Currently, new imaging technologies that augment the surgeon’s senses are being explored for use with less invasive robotic surgery. Mohr will explain how improved imaging has the potential to radically change the way surgery is performed.

Mohr earned a B.S. and M.S. from the Massachusetts Institute of Technology in 1990 and 1992, respectively, and an M.D. from Stanford University School of Medicine in 2006. Early in her career, she was involved with numerous startup companies that specialize in alternative energy, transportation, computer-aided design software, and medical devices. She moved on to work for many years at AeroVironment, Inc., developing alternative energy vehicles, high altitude aircraft, and high-efficiency fuel-cell power systems.

Recently, Mohr founded a company to commercialize a medical device she designed in medical school. Called LapCap, the device prevents accidental puncture of the abdomen during laparoscopic procedures. Since its introduction to the marketplace in 2007, the device has gone on to win two design awards for best new medical product.

At Intuitive Surgical, Inc., Mohr evaluates and directs the development of new robotic surgical procedures and next-generation surgical robots. She is also a part-time instructor at the Stanford School of Medicine, where she works in the Goodman Simulation Center in developing a simulation-based curriculum for teaching clinical skills.