Nobel Laureate Thomas A. Steitz to Speak at Brookhaven Lab on the Ribosome and New Antibiotics, May 23 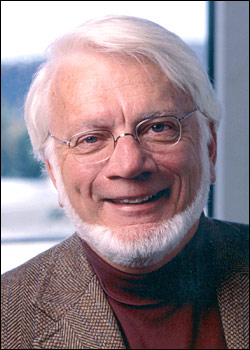 UPTON, NY — Nobel Laureate Thomas A. Steitz of Yale University and the Howard Hughes Medical Institute, will give a BSA Distinguished Lecture, titled “From the Structure and Function of the Ribosome to New Antibiotics,” on Monday, May 23, at 4 p.m. in Berkner Hall at the U.S. Department of Energy’s Brookhaven National Laboratory. BSA Distinguished Lectures are sponsored by Brookhaven Science Associates, the company that manages Brookhaven Lab, to bring topics of general interest before the Laboratory community and the public. The lecture is free, and no preregistration is required. All visitors to the Laboratory 16 and older must bring a photo ID.

The ribosome is a very large macromolecular machine that translates genes into proteins in all living cells. In 2009, Steitz and collaborators Venkatraman Ramakrishnan and Ada E. Yonath won the Nobel Prize in Chemistry “for studies of the structure and function of the ribosome” that were performed, in part, at Brookhaven Lab ’s National Synchrotron Light Source. More recently, Steitz and his team have determined the structures of the functional states of the ribosome as it progresses through the various steps of protein synthesis.

The ribosome is a major target for antibiotics, and Steitz and his team have also determined the structures of many complexes of the ribosome with different families of antibiotics attached to it. The structures of some of the antibiotic complexes have been used by Rib-X Pharmaceuticals, Inc., of New Haven, Connecticut, to develop new potential antibiotic compounds that based on clinical trials, are effective in eradicating MRSA, a bacterial infection that is resistant to antibiotics commonly used to treat staph infections. Also, the team has found two compounds bound to the ribosome that are effective against tuberculosis, making it possible to design new anti-tuberculosis antibiotics.

After earning a Ph.D. in biochemistry and molecular biology from Harvard University in 1966, Steitz performed postdoctoral research at Harvard from 1966 to 1967, and at the MRC Laboratory of Molecular Biology, Cambridge, England, from 1967-1970. He joined the faculty at Yale University in 1970, and the Howard Hughes Medical Institute in 1986. Steitz is currently the Sterling Professor of Molecular Biophysics and Biochemistry and Professor of Chemistry at Yale and an investigator at the Howard Hughes Medical Institute.

A member of the National Academy of Sciences since 1990, Steitz has won many awards for his research, including the Pfizer Award in Enzyme Chemistry in 1980; the Rosenstiel Award for Distinguished Work in Basic Medical Research and the American Association for the Advancement of Science’s Newcomb Cleveland Prize, both in 2001; the Keio Medical Science Prize in 2006; and the Gairdner International Award in 2007.