Talk at Brookhaven Lab on Lise Meitner and the Discovery of Nuclear Fission, 5/19 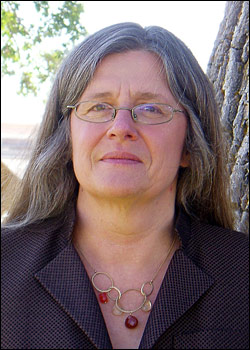 UPTON, NY — Andrea Palounek, a physicist at the U.S. Department of Energy’s (DOE) Los Alamos National Laboratory, will give a talk titled “Lise Meitner and the Discovery of Nuclear Fission” at DOE’s Brookhaven National Laboratory on Thursday, May 19, at 4 p.m. in Berkner Hall. Sponsored by Brookhaven Women in Science, the talk is free and no registration is required. All visitors to the Laboratory 16 and older must bring a photo ID.

Born in Austria in 1878, Lise Meitner has been called “the Jewish mother of the atomic bomb.” In fact she played no role in the invention of the atomic bomb, and, although she was born to Jewish parents, she became a Protestant in 1908. Rather, Meitner correctly could have been called “mother of nuclear fission,” since she was a member of the team that discovered it. While her colleague Otto Hahn was awarded the 1945 Nobel Prize in Chemistry for that discovery, she was not given that honor, even though she gave the first theoretical explanation of the fission process. Her exclusion is often cited as the Nobel committee’s most egregious omission.

Meitner was able to earn a Ph.D. in physics from the University of Vienna at a time when women were not welcome in higher institutions of learning. She also maintained a successful scientific career in Germany and later in Sweden, where she was forced to emigrate. Later in her life, Meitner was finally recognized for her scientific contributions. In 1966, two years before her death, Meitner and her colleagues Hahn and Fritz Strassmann received the Enrico Fermi Award “for their independent and collaborative contributions” to the discovery of fission.

In her talk, Palounek will give an introduction to Lise Meitner’s life and discuss her contributions to physics and society, as well as explain how her work is being rediscovered.

After earning an A.B. in chemistry and physics from Harvard University in 1978, and a Ph.D. in physics from Duke University in 1984, Palounek worked in high-energy physics experiments at the Massachusetts Institute of Technology, and two DOE laboratories – SLAC National Accelerator Laboratory and Lawrence Berkeley National Laboratory — before joining Los Alamos in 1991, where she continued her physics research and held several consecutive management positions. She has recently returned to research, leading work in muon active interrogation, a method to detect certain kinds of nuclear materials.

Palounek has been involved in numerous physics-teaching programs. For example, she led the program “Ring of Light and Storm-Tracking Experiments,” for students and teachers. Also, she was a consultant for the National Conference of Governor’s Schools to develop summer science programs for gifted and talented students in Arkansas and North Carolina.

Call 631-344-2345 for more information about the lecture. The Laboratory is located on William Floyd Parkway (County Road 46), one-and-a-half miles north of Exit 68 of the Long Island Expressway.