UPTON, NY — Scientists at the U.S. Department of Energy’s Brookhaven National Laboratory have helped to uncover the nanoscale structure of a novel form of carbon, contributing to an explanation of why this new material acts like a super-absorbent sponge when it comes to soaking up electric charge. The material, which was recently created at The University of Texas - Austin, can be incorporated into “supercapacitor” energy-storage devices with remarkably high storage capacity while retaining other attractive attributes such as superfast energy release, quick recharge time, and a lifetime of at least 10,000 charge/discharge cycles. 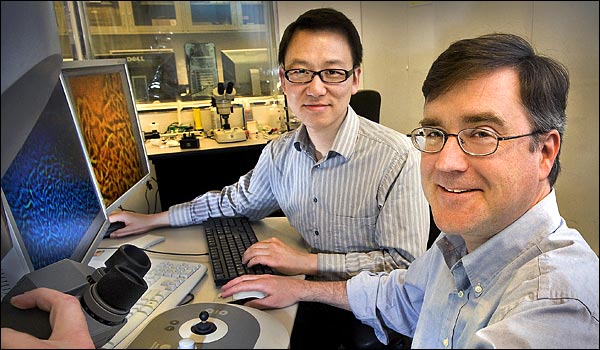 Dong Su and Eric Stach use a powerful electron microscope to analyze samples of activated graphene at Brookhaven’s Center for Functional Nanomaterials. Says Stach: “The CFN provides access to scientists around the world to solve cutting-edge problems in nanoscience and nanotechnology. This work is exactly what this facility was established to do.”

“Those properties make this new form of carbon particularly attractive for meeting electrical energy storage needs that also require a quick release of energy — for instance, in electric vehicles or to smooth out power availability from intermittent energy sources, such as wind and solar power,” said Brookhaven materials scientist Eric Stach, a co-author on a paper describing the material published in Science on May 12, 2011. 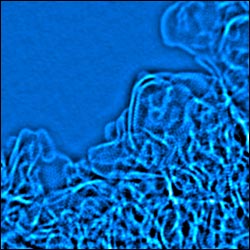 Supercapacitors are similar to batteries in that both store electric charge. Batteries do so through chemical reactions between metallic electrodes and a liquid electrolyte. Because these chemicals take time to react, energy is stored and released relatively slowly. But batteries can store a lot of energy and release it over a fairly long time. 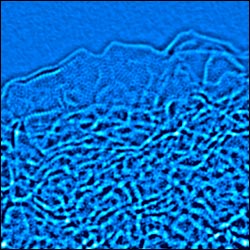 Atomic resolution electron micrograph of activated graphene. The images show that the material is composed of single sheets of crystalline carbon, which are highly curved to form a three-dimensional porous network.

But because most supercapacitors can’t hold nearly as much charge as batteries, their use has been limited to applications where smaller amounts of energy are needed quickly, or where long life cycle is essential, such as in mobile electronic devices.

The new material developed by the UT-Austin researchers may change that. Supercapacitors made from it have an energy-storage capacity, or energy density, that is approaching the energy density of lead-acid batteries, while retaining the high power density — that is, rapid energy release — that is characteristic of supercapacitors.

“This new material combines the attributes of both electrical storage systems,” said University of Texas team leader Rodney Ruoff. “We were rather stunned by its exceptional performance.”

The UT-Austin team had set out to create a more porous form of carbon by using potassium hydroxide to restructure chemically modified graphene platelets — a form of carbon where the atoms are arrayed in tile-like rings laying flat to form single-atom-thick sheets. Such “chemical activation” has been previously used to create various forms of “activated carbon,” which have pores that increase surface area and are used in filters and other applications, including supercapacitors.

But because this new form of carbon was so superior to others used in supercapacitors, the UT-Austin researchers knew they’d need to characterize its structure at the nanoscale.

Ruoff had formed a hypothesis that the material consisted of a continuous three-dimensional porous network with single-atom-thick walls, with a significant fraction being “negative curvature carbon,” similar to inside-out buckyballs. He turned to Stach at Brookhaven for help with further structural characterization to verify or refute this hypothesis.

Stach and Brookhaven colleague Dong Su conducted a wide range of studies at the Lab’s Center for Functional Nanomaterials (CFN), the National Synchrotron Light Source (NSLS), and at the National Center for Electron Microscopy at Lawrence Berkeley National Laboratory, all three facilities supported by the DOE Office of Science. “At the DOE laboratories, we have the highest resolution microscopes in the world, so we really went full bore into characterizing the atomic structure,” Stach said.

“Our studies revealed that Ruoff’s hypothesis was in fact correct, and that the material’s three-dimensional nanoscale structure consists of a network of highly curved, single-atom-thick walls forming tiny pores with widths ranging from 1 to 5 nanometers, or billionths of a meter.”

The study includes detailed images of the fine pore structure and the carbon walls themselves, as well as images that show how these details fit into the big picture. “The data from NSLS were crucial to showing that our highly local characterization was representative of the overall material,” Stach said.

“We’re still working with Ruoff and his team to pull together a complete description of the material structure. We’re also adding computational studies to help us understand how this three-dimensional network forms, so that we can potentially tailor the pore sizes to be optimal for specific applications, including capacitive storage, catalysis, and fuel cells,” Stach said.

Meanwhile, the scientists say the processing techniques used to create the new form of carbon are readily scalable to industrial production. “This material — being so easily manufactured from one of the most abundant elements in the universe — will have a broad range impacts on research and technology in both energy storage and energy conversion,” Ruoff said.