Oceanographer Sylvia Earle to Give a Talk at Brookhaven Lab on 'How Our Fate and the Ocean's Are One,' June 16 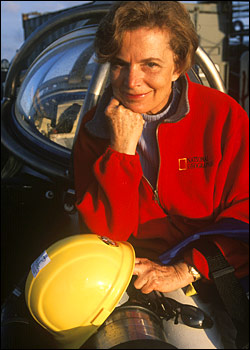 UPTON, NY — Sylvia Earle, an oceanographer dubbed “Hero for the Planet” by Time magazine and a “Living Legend” by the Library of Congress, will give a talk at the U.S. Department of Energy’s Brookhaven National Laboratory on Thursday, June 16, at 4 p.m. in the Berkner Hall auditorium. Before her talk, Earle will be available to informally discuss her work with members of the Laboratory community and the public at 3 p.m. in Berkner Hall, Room C. Sponsored by Brookhaven Women in Science, the talk is free and no registration is required. All visitors to the Laboratory 16 and older must bring a photo ID.

In her talk, titled “The World is Blue: How Our Fate and the Ocean’s Are One,” Earle will discuss how oceanic changes that have occurred over the last half century threaten the existence of life on Earth. According to Earle, overexploitation of the ocean has led to the near extinction of many ocean species, from tiny but essential aquatic plants to swordfish, tuna, and whales. Half of the world’s coral reefs have either died or declined, and toxic pollutants wreak havoc on all aspects of the oceanic food chain. Earle will discuss the strategies that must be taken within the next decade to save the ocean and the planet.

Earle earned her Ph.D. from Duke University in 1966, and she has received 20 honorary degrees. She joined Harvard University as a Radcliffe Scholar in 1967, and she was a research fellow/associate at Harvard until 1981. From 1980 to 1984, she served on the National Advisory Committee on Oceans and Atmosphere, and from 1990 to 1992, she was the chief scientist of the National Oceanic and Atmospheric Administration.

Currently explorer-in-residence at the National Geographic Society, Earle founded Deep Ocean Exploration and Research in 1992 to design, operate, support, and consult on manned and robotic sub-sea systems. In 2008, she founded the SEAlliance, a not-for-profit foundation committed to the expansion and protection of marine protected areas, and in 2009, together with several partners in the private sector and government, she initiated Mission Blue, a marine conservation organization.

Earle has led more than 100 expeditions worldwide involving more than 7,000 hours of underwater research. She led the first team of women aquanauts during the Tektite Project in 1970, and she holds a depth record of 1,000 meters for solo diving. From 1998 to 2002, Earle led the Sustainable Seas Expeditions, a program to study the National Marine Sanctuary System sponsored by the National Geographic Society. She is the author of over 175 publications on marine science and technology, and she has lectured in more than 80 countries. She serves on numerous boards, foundations, and committees related to marine research, policy, and conservation.

Earle is a fellow of the American Association for the Advancement of Science, the California Academy of Sciences, the Marine Technology Society, and the World Academy of Arts and Sciences. She has been awarded more than 100 national and international honors, ranging from the U.S. Department of Interior Conservation Service Award in 1970 to the TED Prize in 2009.