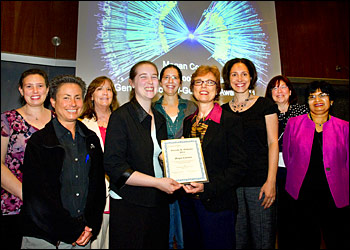 UPTON, NY — Megan Connors, a Stony Brook University (SBU) graduate student, has been awarded the 2011 Gertrude Scharff-Goldhaber Prize, consisting of $1,000 and a framed certificate. Currently funded by Brookhaven Science Associates, the company that manages Brookhaven National Laboratory for the U.S. Department of Energy, the award was established in 1992 by Brookhaven Women in Science (BWIS), a nonprofit organization that supports and encourages the advancement of women in science.

The award recognizes substantial promise and accomplishment by women graduate students in physics who are performing their thesis research at Brookhaven Lab, or who are enrolled at SBU. It commemorates the outstanding contributions of the late nuclear physicist Gertrude Scharff-Goldhaber. In 1950, she became the first woman Ph.D. physicist appointed to the Brookhaven Lab staff. She also was a founding member of BWIS.

Connors earned a B.S. in physics and mathematics from the University of Massachusetts, Amherst, in 2005, and she expects to earn a Ph.D. in physics from SBU this summer. She is performing her research at the PHENIX detector, one of two large detectors at Brookhaven Lab’s world-class accelerator, the Relativistic Heavy Ion Collider. Specifically, she gathers and interprets data from PHENIX, which probes the quark-gluon plasma, the type of matter that is thought to have existed just microseconds after the Big Bang. After she earns her Ph.D., Connors plans to continue studying the quark-gluon plasma in heavy ion collisions as a postdoctoral fellow.