The following news release is being issued by the Daya Bay Reactor Neutrino Experiment Collaboration, which is led by China and the United States. The U.S. Department of Energy’s Brookhaven National Laboratory plays multiple roles in this international project, ranging from management to data analysis. Brookhaven employees Steve Kettell and Ralph Brown are the Chief Scientist and Chief Engineer, respectively, for the U.S. effort. In addition to coordinating detector engineering efforts and developing software and analysis techniques, Brookhaven scientists perfected the “recipe” for a special, very chemically stable liquid that fills part of Daya Bay’s detectors. When antineutrinos react within the detectors, this liquid emits very faint flashes of light that can be detected. For more information about Brookhaven’s role, contact Kendra Snyder, ksnyder@bnl.gov, 631-344-8191, or Peter Genzer, genzer@bnl.gov, 631-344-3174. 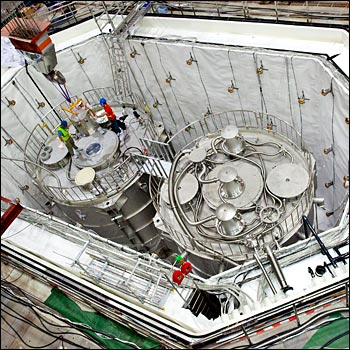 The two antineutrino detectors in Daya Bay Hall #1, shown here prior to the pool being filled with ultrapure water. The pool is lined with photomultiplier tubes to track any "stiff" (highly energetic) cosmic rays that make it all the way through the overlying rock. (Courtesy of Roy Kaltschmidt, Lawrence Berkeley National Laboratory)

BEIJING; BERKELEY, CA; and UPTON, NY — The Daya Bay Reactor Neutrino Experiment has begun its quest to answer some of the most puzzling questions about the elusive elementary particles known as neutrinos. The experiment’s first completed set of twin detectors is now recording interactions of antineutrinos (antipartners of neutrinos) as they travel away from the powerful reactors of the China Guangdong Nuclear Power Group in southern China.

Neutrinos are uncharged particles produced in nuclear reactions, such as in the sun, by cosmic rays, and in nuclear power plants. They come in three types or “flavors” — electron, muon, and tau neutrinos — that morph, or oscillate, from one form to another, interacting hardly at all as they travel through space and matter, including people, buildings, and planets like Earth.

The start-up of the Daya Bay experiment marks the first step in the international effort of the Daya Bay Collaboration to measure a crucial quantity related to the third type of oscillation, in which the electron-flavored neutrinos morph into the other two flavored neutrinos. This transformation is due to the least-known neutrino “mixing angle,” denoted by θ13 (theta one-three), and could reveal clues leading to an understanding of why matter predominates over antimatter in the universe.

“This is a remarkable achievement after eight years of effort — four years of planning and four years of construction — by hundreds of physicists and engineers from around the globe,” says Yifang Wang of the Institute of High Energy Physics (IHEP) of the Chinese Academy of Sciences, co-spokesperson for the Daya Bay Collaboration. “We worked collectively to build the underground experimental facility to detect antineutrinos from reactors, in order to find a new type of neutrino oscillation and measure it quantitatively.”

“The first data from Daya Bay sets us on a path that will lead to measurement of the amplitude of the oscillation due to the least-known mixing angle to within one percent,” says Daya Bay co-spokesperson Kam-Biu Luk, of the U.S. Department of Energy’s Lawrence Berkeley National Laboratory (Berkeley Lab) and the University of California at Berkeley. “That precision is an order of magnitude better than present measurements and much more precise than other experiments now in progress. The results will be a major contribution to understanding the role of neutrinos in the evolution of basic kinds of matter in the earliest moments after the big bang, and why there is more matter than antimatter in the universe today.”

The Daya Bay Experiment is well positioned for a precise measurement of the poorly known value of θ13 because it is close to some of the world’s most powerful nuclear reactors — the Daya Bay and Ling Ao nuclear power reactors, located some 55 kilometers from Hong Kong — and it will take data from a total of eight large, virtually identical detectors in three experimental halls deep under the adjacent mountains. 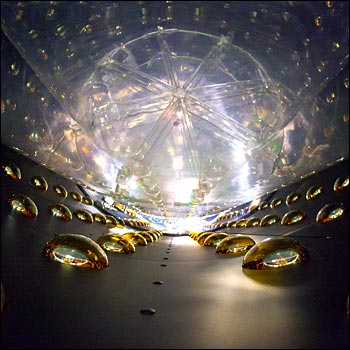 The innards of each cylindrical antineutrino detector are like a Russian doll, with one transparent acrylic vessel nested inside another one, both of which sit inside a third vessel made of stainless steel. When filled with clear liquid scintillator, the detectors will reveal antineutrino interactions by the very faint flashes of light they emit. Sensitive photomultiplier tubes line the detector walls, ready to amplify and record the telltale flashes. (Courtesy of Roy Kaltschmidt, Lawrence Berkeley National Laboratory)

The cylindrical antineutrino detectors are filled with clear liquid scintillator, which reveals antineutrino interactions by the very faint flashes of light they emit. Sensitive photomultiplier tubes line the detector walls, ready to amplify and record the telltale flashes.

A relatively small number of these interactions, over a thousand a day out of the millions of quadrillions of antineutrinos produced by the reactors every second, will be captured by the twin detectors in each near hall. Due to their greater distance, the four detectors in the far hall will measure only a few hundred a day. To measure θ13, the experiment records the precise difference in flux and energy distribution between the near and far detectors.

The experimental halls are dug deep under the mountain to shield the detectors from cosmic rays. The antineutrino detectors are submerged in pools of water to shield them from radioactive decays in the surrounding rock. Despite shielding, some energetic cosmic rays make it all the way through; their trajectories are tracked by photomultiplier tubes in the walls of the water pool and “muon trackers” in the roof over the pool. Events of this kind are ignored in collecting the antineutrino data.

After two to three years of collecting data with all eight detectors, the Daya Bay Reactor Neutrino Experiment intends to meet the goal of measuring the oscillation amplitude of θ13 with a sensitivity of one percent.

China and the United States lead the Daya Bay Reactor Neutrino Experiment, which includes participants from Russia, the Czech Republic, Hong Kong, and Taiwan. The Chinese effort is led by project manager Yifang Wang of the Institute of High Energy Physics, and the U.S. effort is led by project manager Bill Edwards of Lawrence Berkeley National Laboratory and chief scientist Steve Kettell of Brookhaven National Laboratory.