Physicist Nima Arkani-Hamed to Give a Talk at Brookhaven Lab on 'Space Time, Quantum Mechanics and the Large Hadron Collider, October 19 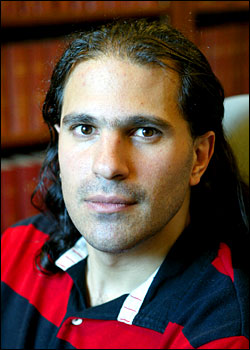 UPTON, NY — Nima Arkani-Hamed, a professor in the School of Natural Sciences at the Institute for Advanced Study in Princeton, New Jersey, will give a BSA Distinguished Lecture titled "Space-Time, Quantum Mechanics and the Large Hadron Collider," on Wednesday, October 19, at 4 p.m. in Berkner Hall at the U.S. Department of Energy's Brookhaven National Laboratory. BSA Distinguished Lectures are sponsored by Brookhaven Science Associates, the company that manages Brookhaven Lab, to present topics of general interest to the Laboratory community and the public. The lecture is free, and no preregistration is required. All visitors to the Laboratory age 16 and older must bring a photo ID.

Arkani-Hamed will explain that fundamental physics started in the early twentieth century with two revolutionary theories: Einstein's laws of general relativity, which explain that space and time are distorted by mass and energy; and quantum mechanics, which explains the behavior of atoms and molecules. Physicists confirmed these theories with exquisite precision through experiments over the last three decades, but they are still searching for an all-encompassing theoretical structure that unifies both of them.

According to Arkani-Hamed, combining these two theories shows mathematically that space-time is doomed and the existence of the universe is implausible. Physicists are attempting to understand these discrepancies and may find the answers to the challenges of fundamental physics in experiments at the world's largest and highest energy accelerator, the Large Hadron Collider (LHC) at CERN, the European Organization for Nuclear Research. In his talk, Arkani-Hamed will discuss the great theoretical physics challenges of today and what physicists expect to learn by 2020, based on their studies at the LHC about the fundamental nature of the universe.

Nima Arkani-Hamed, a theoretical physicist, earned a B.Sc. in physics and mathematics from the University of Toronto in 1993 and a Ph.D. in physics from the University of California, Berkeley, in 1997. He did postgraduate work at the Stanford Linear Accelerator Center before joining the Berkeley faculty in 1999. In 2001, he joined Harvard University as a professor of physics, before moving to his current position at the Institute for Advanced Study in 2008. A member of the American Academy of Arts and Sciences, Arkani-Hamed was awarded the Gribov Medal of the European Physical Society in 2003 and the Raymond and Beverly Sackler Prize awarded by Tel Aviv University in 2008. He delivered the Messenger Lectures at Cornell University in 2010.